Kitten
Victoria is the protagonist of the 2019 Cats movie. She is portrayed by Francesca Hayward.

The character's role has been greatly expanded from her stage counterpart. The movie version of Victoria remains a graceful ballerina, but has taken over Jemima/Sillabub's role in the stage show with regards to Grizabella's story, as well as being given a new backstory to allow her to serve as the audience surrogate. To complement the character's expanded role, a new song titled "Beautiful Ghosts" was written especially for Victoria in the movie.

Victoria is a naive and kind-hearted kitten. Having been abandoned by her owner, she now longs to find a place where she is wanted and loved.

Victoria is abandoned in the streets of London by her human owner at the start of the movie. She is found and befriended by a tribe of cats, the Jellicles, who proceed to introduce her to their world.

Victoria learns that tonight is the night of the Jellicle Ball which will see one of the cats ascend to the Heaviside Layer. Throughout the movie, she is introduced to the various Jellicles who are vying for that honour including Jennyanydots, Bustopher Jones, Gus and Skimbleshanks. Along the way, she also meets the charismatic Rum Tum Tugger, the villainous Macavity, the troublemaking Mungojerrie and Rumpleteazer, as well as the despised Grizabella. Unlike the other cats, Victoria is sympathetic to Grizabella's plight.

Meanwhile one of the Jellicles, Mistoffelees, takes an immediate liking to her and tries to impress her with his magic tricks. Victoria is initially amused by his hapless attempts but shows more interest in flashier cats like Tugger. The pair eventually grow closer as Mistoffelees proves his loyalty to her and she helps him gain confidence in his magical abilities.

Victoria meets the Jellicle leader Old Deuteronomy at the Ball and is told that she is not yet one of the Jellicles. When Grizabella is chased out of the Ball, Victoria follows and hears her sing "Memory". In response, Victoria sings "Beautiful Ghosts", reflecting on how she was "born into nothing" and her desire to feel wanted and loved. She is initially afraid that she may never have the beautiful memories that Grizabella once had, but realizes that she has a shot at having "something to cling to" with the Jellicles. She later encourages Grizabella to sing "Memory" in front of the other cats, with Victoria joining in for the soprano part. Victoria is elated when Grizabella is chosen to go to the Heaviside Layer. At the end of the movie, Victoria has finally found a place where she is accepted and loved as Old Deuteronomy confirms that she is now a Jellicle cat.

Victoria is a collarless white cat with light brown stripes and spots. She is possibly an Ocicat or Egyptian Mau. 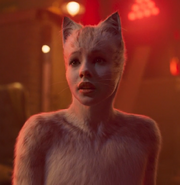 Victoria meeting the Jellicles for the first time

During "The Old Gumbie Cat" 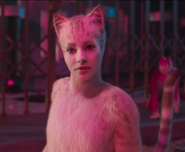 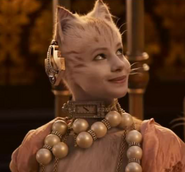 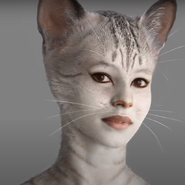 Feel free to add any headcanons or theories you have about Victoria. But don't delete other people's ideas.