Dancer
Victoria the White Cat is a featured dancer in the musical Cats. She is a beautiful and graceful kitten who is coming of age.

The 2019 Cats movie made Victoria its protagonist, played by Francesca Hayward. Read more about this version of the character here.

Victoria is a young cat, the eldest of the four female kittens. She is one of the kinder and more accepting cats, like Jemima/Sillabub, and is well-liked by the rest of the tribe. Her movements are graceful, elegant, and timid, although she is not shy around Rum Tum Tugger.

Victoria is the principal ballerina in the show. While she does not sing any solo lines, she features heavily in the dance numbers. In "The Invitation to the Jellicle Ball", she dances a slow, lyrical solo that symbolises her coming of age, puberty and sexuality.[1] During "The Jellicle Ball", in one of the more mature scenes in the show, we see Victoria's intimate pas de deux (known to fans as the "mating dance"). Which male cat she performs this with varies between productions but is most commonly Plato/Admetus or Tumblebrutus. While Jemima/Sillabub has the revelation that enables her to understand Grizabella's suffering, Victoria is the first to touch Grizabella.

Her name is not mentioned in "The Naming of Cats", but was likely inspired by Queen Victoria who is mentioned a few times in Old Possum's Book of Practical Cats (1939). The performer playing Victoria will often have a noticeable reaction whenever Queen Victoria is brought up in the musical. Spelling variants of her name include Viktoria (German) and Wiktoria (Polish).

The character's official "White Cat" moniker may be an homage to The White Cat from Tchaikovsky's famous ballet The Sleeping Beauty. Cats choreographer Gillian Lynne received her first major solo in this ballet early on in her career.

The following names have also been used for the character of Victoria in various international productions:

Victoria and Jemima are often paired together, both on-stage and at showcases, to represent the two sides of the show; Victoria standing for grace, beauty, and elegance, and Jemima standing for innocence, emotion and playfulness.

Andrew Lloyd Webber has said that they originally wanted one actress who was both the beautiful solo dancer that is Victoria and the sweet-voiced soprano that is Jemima. However, when they couldn't cast a dancer with a strong enough voice, the concept of the female kitten was split into the two roles.

Victoria, the White Cat, is often used to represent the "spirit" of the musical. On the last night of the original London production, a young girl dressed as Victoria danced, representing the next life of the musical. When the Broadway production of Phantom of the Opera overtook Cats as the longest running Broadway show, the actress who was playing Christine Daae at the time dressed up as Victoria to pass the torch on at a special Phantom curtain call.

Victoria is a pure white kitten. She wears a bejewelled pink collar that offsets her pale markings.

Practically speaking, putting a pure white costume under stage lighting washes out all the costume details, so while the impression given is pure white, she is actually fairly detailed. She has light gold, tan, or grey markings on her costume. She has a pink or black nose and even dark copper markings on the sides of her face. 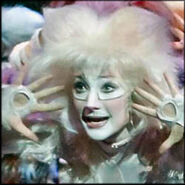