Dancer
Victor is a minor character in the musical Cats. He originated in the ensemble of the London production, and occasionally appears as a swing character in larger productions worldwide.

Victor is principally a dance role. He is one of the Raffish Crew and is often seen hanging out with Bill Bailey. Victor is a tall boy, as the understudy to Munkustrap he needs to have the same physical abilities such as being able to lift and throw Macavity.

Although the character originated in the London production, he was not included in the cast when the show first premiered in 1981, and was instead added later that year.

In productions with Australian-style named swings, Victor is sometimes used as a chorus/swing character.

"Victor" is taken from the T S Eliot poem "The Naming of Cats", where it is mentioned as one of the "sensible, everyday names". Spelling variants of his name include Wiktor (Polish).

The following names have also been used for the character of Victor in various international productions:

Victor is a tall, dark brown or blue tabby with a white stomach. The actor playing Victor is the understudy for Munkustrap and Rum Tum Tugger. Victor's makeup design looks like a blend of those two characters, the brown colours of Tugger with the stripe details of Munkustrap.

Victor's design appears to be the same as the Broadway Plato design, which is labelled as a potential Alonzo design.

Original Design, used for Victor in the London production. 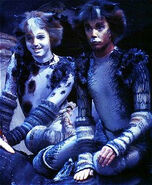