Mick Potter
Following the closure of the Broadway Revival in December 2017, a new 6th US Tour began in January 2019.

Due to the ongoing coronavirus pandemic, all performances of the Equity production from the 13th of March 2020 onwards were postponed then cancelled. The tour re-launched as a non-Equity production on the 21st of September 2021.[1]

This production is the first tour of the Broadway Revival of Cats. It follows the revival's blend of new and classic material, with few differences. The most obvious differences are in a slightly reduced cast, and a less elaborate set. Electra and Carbucketty are absent, and young Grizabella appears in the opening sequence. The production uses the NAP 11A "inflatable" set. , which requires some practical differences to blocking: for example, the car boot does not open, so Jennyanydots is discovered lying on top of the car rather than inside it for the opening of The Old Gumbie Cat.

For the first 18 months the tour was performed under the Equity union standards, with a planned break in the summer of 2020. The tour was then planned to continue from October 2020 with a non-Equity company. The global COVID-19 pandemic caused the Equity union run of the show to close early on the 12th March 2020, and the opening of the non-Equity run was delayed until 21st September 2021. The tour is booking for 2021 and 2022 seasons, with many booked performances rescheduled rather than cancelled.

Cats, the record-breaking musical spectacular by Andrew Lloyd Webber that has captivated audiences in more than 30 countries and 15 languages, is now on tour across North America! Audiences and critics alike are rediscovering this beloved musical with breathtaking music, including one of the most treasured songs in musical theater—"Memory." Winner of seven Tony Awards, including Best Musical, Cats tells the story of one magical night when an extraordinary tribe of cats gathers for its annual ball to rejoice and decide which cat will be reborn. The original score by Lloyd Webber (The Phantom of the Opera, School of Rock, Sunset Boulevard), original scenic and costume design by John Napier (Les Misérables), all-new lighting design by Natasha Katz (Disney's Aladdin), all-new sound design by Mick Potter, new choreography by Andy Blankenbuehler (Hamilton) based on the original choreography by Gillian Lynne (Phantom) and direction by Trevor Nunn (Les Misérables) make this production a new Cats for a new generation!

Today[2] (October 29th 2018), in celebration of National Cat Day, producers announced casting for the North American tour of the first ever Broadway revival of Cats. The multi-year tour will launch at Providence Performing Arts Center on January 22, 2019 and play 24 cities in its first season.

The equity tour started in Providence, Rhode Island on the 22nd of January 2019. Due to the COVID-19 pandemic, the tour was cut short, having the final performance on the 12th of March 2020 in Ottawa, Ontario.

Most venues follow the pattern of evening shows Tuesday - Friday, two shows on Saturday and Sunday. However in New Mexico, the show performs a Tuesday evening and Wednesday matinee in Alto, NM, with Thursday - Sunday shows in Albuquerque. This indicates that the show will be able to move venues overnight, install and tech within 24 hours, despite most of the dates indicating at least one travel day between venues.

As with the 2016 Broadway revival, the "Ensemble" versions of characters such as Deuteronomy, Tugger and Gus have been given names. "Ensemble Tugger" is now "Bill Bailey" - however this is no relation to Bill Bailey the existing character. Although Grizabella is not given an ensemble name, she does take part in the opening number in this production.[3] Electra, who made her first appearance in a US production in the Broadway revival, has been cut from this production, along with Carbuckety (although their costumes are displayed in the theatre lobby at certain stops). However the twins Coricopat and Tantomile who were cut from the Troika touring production, are present in this larger scale tour.

The non-equity tour started on the 21st of September 2021 in Rochester, New York. It is the second non-equity production since the 5th national tour. It’s also being referred to the 40th anniversary national tour.

Due to the ongoing COVID-19 pandemic, performers no longer leave the stage to interact with the audience. For example, during the Overture, “green-eyes” has been replaced by lighting that resemble tiny cat eyes that appear throughout the stage. There’s now an extended dance break during Rum Tum Tugger and Old Deuteronomy’s entrance is now from downstage left. There is one exception: in some venues cast members move down the centre of the aisles during The Naming of Cats, while in others they remain onstage in the footlights.

A few other changes were also made from the previous equity tour. Rather than entering through a rope, Mistoffelees enters from upstage right, lightning a few lights as he comes towards the center before restoring them all. And when Grizabella ascends to the heaviside layer, she walks on the platform to the left of the stage (audience view) instead of flying on a wire to the right.

In the spring of 2022, a continuation of the tour was announced for a 2022-2023 season. A complete tour schedule has not been released for the time being.

Full casting information not yet announced. 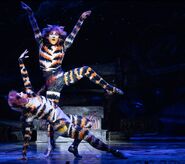 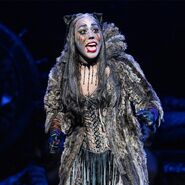