Following the end of the limited run at the Palladium in January 2016, Cats began a UK / European Tour, starting in Manchester at the end of January 2016. The set uses the number plate "NAP 13R".

The production toured the UK, as well as engagements in Italy and Switzerland in 2016. In 2017 and 2018 the same production had stops in the Middle East, Asia as well as European venues, with no UK tour dates announced. The production continues to be performed in English. The 2018 leg of the tour began in Hong Kong, and included visits to 13 Chinese cities, before taking a hiatus. The tour returned to Europe at the very end of 2018 into 2019, continuing on to East Asia and South East Asia from 2019 onwards. Due to the Covid pandemic, dates in Asia in 2020 and Europe into 2021 were cancelled. The tour resumed on 13 May 2022 in Switzerland, and played dates across Europe.

In terms of material performed, the 2016 run of this tour followed closely to the Palladium revisions, with Street Cat Tugger, glamorous Grizabella, the Bill Deamer choreographed tap number etc. The production cut "Pouncival" from the cast list, however used the Pouncival/George costume (as well as two distinctly different Electra costumes) as swing costumes.

Changes within the 2016 Run

Similar to the 2007-2010 Australasia tour, Jemima sang her "Moonlight" verse of "The Moments of Happiness" in Mandarin Chinese during the tour stops in China.

See HERE for more details on the changes to the score.

From the 2022 run onwards, the production used new character designs created by John Napier in 2021.

Asia 2020 Cats was originally scheduled to play the following tour dates in China. However, the dates were cancelled as a result of the coronavirus pandemic.[1]

Cats was planned to tour Germany, Austria and Switzerland from December 2020, performing in English. The regional dates were to be produced by Mehr-BB Promotion. However with the ongoing pandemic these plans were not set in action.

Initial cast list announcements listed Rebecca Parker as playing Bombalurina, however from the first performance the role was covered by Megan Armstrong, initially a swing in the production.

The Ad-Dressing of Cats 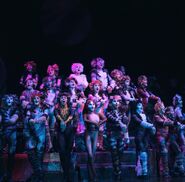 Before the tour was suspended due to the Covid-19 pandemic, the following cast had been announced for the since-cancelled 2020 China run: Rhys Batten as Coricopat / Dance Captain, Jo Bird as Tantomile, Karina Russell as Victoria. Because of the tour's suspension, many of the cast members ended up transferring to the 2020 Asia Tour instead. 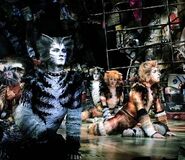 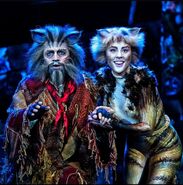