Raymond Huessy
The UK Tour IV (also known as UK/European Tour) started on the 9th February 2013 in Edinburgh, Scotland. It toured the UK, Italy, Belgium, Turkey and Greece. The final performance was in Tel Aviv, Israel, on 15th November 2014, prior to the commencement of rehearsals for the December 2014 London Palladium production.

Technically, the London Palladium run was an extended stop of the tour; practically speaking, however, the Palladium had significant alterations made to it that earn it recognition as a separate production.

The production was mostly based on the 3rd UK Tour, with some modifications made to the set.

Firstly, the set was slightly modified, with several elements changed or removed. Rather than the descending steps for Grizabella's ascent to the Heaviside layer, the tour used the "UFO" set for the chandelier rig. Also removed were Mistoffelees' rope entrance and the trapeze in Jellicle Songs. Otherwise, the tour set (NAP 16) was indistinguishable from the one used on the previous UK Tour.

The number of cats in the ensemble (22 in total; no Electra) and the orchestration were the same as on the former tour.

The 2014 Cast Change took place halfway through the two week run in Wimbledon. 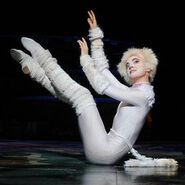