Dancer, Acrobat
Tumblebrutus is an ensemble character in Cats. He is a playful and acrobatic young tom.

He originated in the Broadway Production as an alternate for the original London character known as Bill Bailey.

Tumblebrutus is usually portrayed as an adolescent, growing up but still unsure of himself, trying to be one of the big boys like Alonzo and Plato, but still getting up to mischief with the kittens like Pouncival. Occasionally, this age dynamic of adolescent Tumblebrutus and kitten Pouncival is reversed, making Tumble the youngest tom-kitten.

Tumblebrutus, appropriate to his name, is the main tumbler of the show, requiring gymnastic skills above any other role. His acrobatic prowess is featured throughout the show, most prominently during the "Jellicle Ball". He usually has a few vocal lines in the group numbers. His performer is typically the understudy for Mungojerrie.

In the 1980s and 1990s, most productions outside of the UK had Tumblebrutus performing the pas de deux (known to fans as the "mating dance") with Victoria at the "Jellicle Ball". This is tied to them both being coming-of-age characters. Productions that had Tumblebrutus in this role include Broadway, the US tours, Vienna, Australia, Hamburg, and so on. Since the release of the 1998 film however, this dance feature is usually given to Plato instead, though Tumblebrutus still did the mating dance in the 5th US tour.

In the Japanese production, Tumblebrutus is paired with Cassandra as the "twin" cats rather than Coricopat and Tantomile. This version of Tumblebrutus is thus not a playful kitten but instead a more solemn adult.

"Tumblebrutus" is also the name of the bosun of Growltiger's pirate crew, however the ensemble Tumblebrutus is not part of this. Instead, the bosun is usually played by Munkustrap.

"Tumblebrutus" is taken from the T S Eliot poem "Growltiger's Last Stand", where it is the name of Growltiger's bosun. Eliot may have based this name on a cat he had called "Tumblecat".[1]

The first part of his name, "tumble", can refer to either falling over or an acrobatic feat such as a handspring. The second part, "brutus", can refer either to "brute" i.e. rough and violent, or to the historical figure Marcus Brutus who is famous for his betrayal of Julius Caesar.

The following names have also been used for the character of Tumblebrutus in various international productions:

Tumblebrutus is a white and brown patched tom cat, often depicted in the show as a kitten. Of all the cats with dual names/personalities, his appearance remains the most consistent, having a distinctive brown patch over his right eye, and brown patches on his right shoulder and left hip. 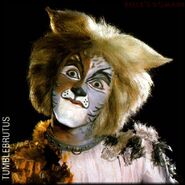 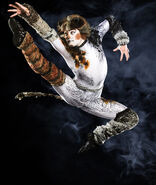