The Song of the Jellicles

The Song of the Jellicles

"The Awefull Battle of the Pekes and the Pollicles"

T S Eliot
"The Song of the Jellicles" is a song celebrating the attributes, mannerisms and customs of the Jellicle Cats. It is often conflated with "The Jellicle Ball", but it is the first, sung section of the overall dance sequence.

Following the Macavity scare, only Old Deuteronomy and Munkustrap remain onstage. They survey their surroundings for any sight of Macavity, but he is nowhere to be found. Slowly, Victoria and Jemima/Sillabub emerge from their hiding places at the opposite ends of the stage - both still scared and on guard for Macavity.

Old Deuteronomy is now convinced that it was a false alarm. Together with Victoria, Jemima/Sillabub and Munkustrap, he calls for the Jellicles to come out of hiding so that the Ball can begin. One by one, the cats make their way back to the stage, all the while describing and celebrating what makes a Jellicle cat.

Jellicle Cats are black and white
Jellicle Cats, as we said, are small
If it happens to be a stormy night
We will practice a caper or two in the hall

If it happens the sun is shining bright
You would say we had nothing to do at all
We are resting and saving ourselves to be right
For the Jellicle Moon and the Jellicle Ball! 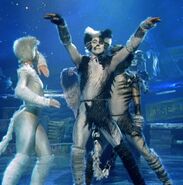