"Invitation to the Jellicle Ball"

T S Eliot
"The Naming of Cats" is a musical number that explains the naming customs of the Jellicle tribe. It is the second number in the show, with the audience having just been introduced to the concept of Jellicle Cats in the prologue.

There's a man over there with a look of surprise
As much as to say, well now how about that?

Do I actually see with my own very eyes
A man who's not heard of a Jellicle Cat?

The cats are at first suspicious and reluctant to allow the audience into their domain. But slowly, the entire ensemble gathers to quietly and intensely explain The Naming of Cats. They reveal to their human visitors that cats have three different names: one that the family uses daily, a more dignified name and a secret name. The contemplation of these secret names keep the felines deep in thought.

Rather than sung, the number is recited in unison by the cast. In most productions, the cast will drift from the stage, slowly spreading out throughout the theatre, making intense eye contact with members of the audience as they speak. They then slink out through various side exits as the number ends, with only Victoria remaining on stage for her "White Cat Solo".

The text for this number is taken in its entirety from the T S Eliot poem of the same name from Old Possum's Book of Practical Cats (1939). Many of the ensemble characters' names are drawn from the names mentioned in the poem; in fact very few of the names mentioned are not attached to a character in at least some productions (see Trivia section).

"The Naming of Cats" is presented as a hushed chant. The music that accompanies it is based entirely on fragmented and dissonant variations of the recurring Jellicle theme. It has no consistent key signature or harmonic structure. The number is such that it is delivered in perfect unison, but using natural speech rhythms.[1]

While the score sets much of the vocal line in even eighth notes (in 6/8 meter), the performers rarely hold to this in practice. The performers also speak on different pitches to one another; their vocal ranges and inflections vary, never settling into any matching sing-song patterns. As they wander out into the audience, the audience members can hear the individual voices nearest to them.[1]

The Naming of Cats is a difficult matter,
It isn't just one of your holiday games;
You may think at first I'm as mad as a hatter
When I tell you a cat must have three different names.

First of all, there's the name that the family use daily,
Such as Peter, Augustus, Alonzo or James,
Such as Victor or Jonathan, George or Bill Bailey,
All of them sensible, everyday names.

There are fancier names if you think they sound sweeter,
Some for the gentlemen, some for the dames:
Such as Plato, Admetus, Electra, Demeter,
But all of them sensible everyday names.

But I tell you a cat needs a name that's particular,
A name that's peculiar, and more dignified,
Else how can he keep up his tail perpendicular,
Or spread out his whiskers, or cherish his pride?

Of names of this kind, I can give you a quorum,
Such as Munkustrap, Quaxo or Coricopat,
Such as Bombalurina, or else Jellylorum,
Names that never belong to more than one cat.

But above and beyond there's still one name left over,
And that is the name that you never will guess;
The name that no human research can discover,
But the cat himself knows, and will never confess. 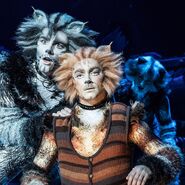 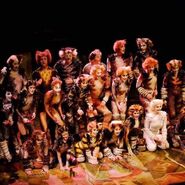