The Moments of Happiness

The Moments of Happiness

T S Eliot and Trevor Nunn
"The Moments of Happiness" is a musical number that sees Old Deuteronomy contemplate the meaning of happiness, while Jemima/Sillabub relays his message to the tribe. This number opens Act 2 of Cats.

This number begins slowly, as the cast gradually make their way onstage through various entrances in the auditorium, interacting with the audience as they go. Old Deuteronomy often spends the interval sitting alone onstage, reflecting on the tribe's attitude and hostility towards Grizabella. Eventually he begins to sing, pondering the true meaning of happiness and trying to explain the philosophy behind the tribe's customs. The song is quiet and reflective. The mystical twins, Coricopat and Tantomile, channel Old Deuteronomy's wisdom into Jemima/Sillabub, who explains the concept in far simpler language, singing "Moonlight, turn your face to the Moonlight". In most productions, the ensemble sings a repeat of Jemima/Sillabub's verse.

The entire ensemble are onstage for this number, including Gus in his old form, ready to be introduced. Even Grizabella is present, though she hides on a ledge, unseen by the other cats.

The text that Old Deuteronomy sings is adapted from the T S Eliot poem "The Dry Salvages" from Four Quartets (1943).

Excerpt from "The Dry Salvages":

It seems, as one becomes older,
That the past has another pattern, and ceases to be a mere sequence -
Or even development: the latter a partial fallacy
Encouraged by superficial notions of evolution,
Which becomes, in the popular mind, a means of disowning the past.
The moments of happiness - not the sense of well-being,
Fruition, fulfilment, security or affection,
Or even a very good dinner, but the sudden illumination -
We had the experience but missed the meaning,
And approach to the meaning restores the experience
In a different form, beyond any meaning
We can assign to happiness. I have said before
That the past experience revived in the meaning
Is not the experience of one life only
But of many generations - not forgetting
Something that is probably quite ineffable:
The backward look behind the assurance
Of recorded history, the backward half-look
Over the shoulder, towards the primitive terror.

"The Moments of Happiness" begins with an instrumental opening which uses a few chords from the slow middle section of the "Jellicle Ball" (fragments of the recurring Jellicle theme). This segues into Old Deuteronomy's melody which in turn leads straight into his solo.[1] Old Deut's stanza is set in the time signature of 4/4. It starts out composed in the key of Eb minor but shifts to Eb major towards the end. His vocals span from D4 to Gb5. The transitional chords to Jemima/Sillabub's part are played in the 6/8 meter.

Jemima/Sillabub's verse is sung "with childlike innocence" to the melody of "Memory", but in the D major key instead of the song's usual home key of Bb major. It is performed in the 12/8 meter, switching to 10/8 for one bar, and follows a chord progression of D-Bm-G-F#m-Bm-A-G/A-D. Her vocals range from B3 to E5. The ensemble repeat her verse in hushed, gentle tones before the orchestra take over, playing the bridge section and another verse, the final downbeat of which becoming the first note of the next number, "Gus: The Theatre Cat".[2]

The past experience revived in the meaning
Is not the experience of one life only
But of many generations - not forgetting
Something that is probably quite ineffable ...

Jemima/Sillabub:
Moonlight,
Turn your face to the moonlight
Let your memory lead you
Open up, enter in
If you find there the meaning of what happiness is
Then a new life will begin

The Moments of Happiness Cats the Musical
1998 film 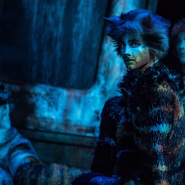 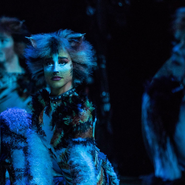 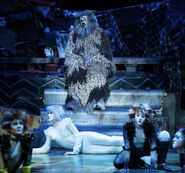