Tantomile is an ensemble character in Cats. She is the female half of the "psychic twins",[1] with the male half being Coricopat.

Tantomile and her identical twin brother Coricopat are "Witches' Cats", possessing psychic abilities including clairvoyance[2] and telepathy. They foretell the arrival of Old Deuteronomy, and are often the first to sense changes in their environment such as the approach of Grizabella or Macavity. They also telepathically channel Old Deuteronomy's wisdom into Jemima/Sillabub during "The Moments of Happiness".

The twins seemingly share a psychic link that enables them to sing and move with uncanny synchronisation.

The twins often appear mysterious and reticent, preferring to keep to themselves. Tantomile is sometimes portrayed as having a more playful side, joining the female kittens as they squeal over the Rum Tum Tugger. This is usually the case in smaller productions where she is played younger, essentially taking the place of one of the minor female kittens.

Tantomile is principally a dancing role. She shares most of her vocal lines with Coricopat, though she is often given a solo line in "Jellicle Songs for Jellicle Cats". She and Coricopat often perform lifts and dance together.

The twins use their psychic powers to help the tribe; when Mistoffelees senses Old Deuteronomy's arrival, the Jellicles immediately look to the twins for confirmation. Tantomile and Coricopat also help Old Deuteronomy convey his message about the meaning of happiness to Jemima/Sillabub.

The names "Cassandra" and "Tumblebrutus" are used for the "twins" in the Japanese production, though they are not necessarily portrayed as siblings. Tantomile and Coricopat are sometimes cut from smaller productions.

T S Eliot invented the name "Tantomile" for a "witch's cat",[3] though the name does not appear in "The Naming of Cats".

The following names have also been used for the character of Tantomile in various international productions:

Tantomile's costume is generally near identical to Coricopat's, with the exception of her red lipstick. Her costume is striped and hatched to suggest tabby markings, and also echoes the clouded moon featured on the set. The London costume initially used the actor's own hair rather than a wig, but in time the twins developed identical short wigs with rolled ears sweeping up from the sideburns. In 2003 the styling was changed, rather than the rolls representing their ears, short tufty ears were added as well as the rolls. This double-eared look was replicated across all London-style productions. The original Broadway style, imitated by other productions in the 1980s and 1990s, gave the twins sleek fan-eared wigs.

Her figure is another clear distinction between herself, and Coricopat. Being that she is a female, and that Coricopat is a male, their body's are shaped differently. Weight is not distributed equally. Tantomile is slimmer, and not as bulky/muscular as her twin. Most of her mass being in her thighs, and bottom. This, of course, can change based on the cast of the show. Most of time time however, this is accurate. Her feminine physical attributes are a great way to decipher the two if trouble arises. 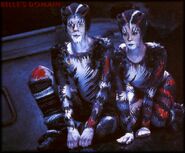