Swings are performers who do not have one specific role in the show, instead they understudy multiple roles. In general theatre terms, swings cover ensemble roles while the ensemble understudy principal roles, leading to a "domino effect" as three or four people move roles to cover one principal absence. However in the case of Cats, certainly in productions with a larger number of swings, the swings often cover principal roles as well as ensemble.

Some productions of Cats have utilised Swing Characters; characters specific to individual swing performers, each given a name, a unique costume design and their own personality. Admetus, Bill Bailey, Carbucketty, Electra, Etcetera, Exotica, George, Jemima, Jonathan, Murad, Noilly Prat, Olivia, Quaxo and Victor have all been used as names for swings, while the roles that can be considered their counterparts (e.g. Sillabub and Jemima) are in the ensemble. In these productions, swings often appear in the audience and in large numbers, but if a performer misses a show the role is not replaced. These swings may also wear their swing costume if covering an ensemble character, so a swing will not need their own copy of each costume for every character they cover. For more information, See Here.

Cats has run between having no swings, but named ensemble characters who can be cut from the show should the performer need to understudy a more prominent role, to running with 4-5 swings, to having more swings backstage than performers onstage - the Hamburg production at one point listed 27 swings to 22 characters onstage.

The Japanese Production notably does not use the swing/understudy format. Instead, multiple alternates are cast for every role, resulting in very large casts that can have upwards of 80 performers covering 24 roles.

Some productions of Cats refer to the swings as "Cats Chorus", in other productions the "Cats Chorus" are specifically Booth Singers, who may or may not also cover roles onstage. Booth singers are backstage, and sing along with the cast onstage to augment the vocals. In modern productions it is common for some, or all of the swings to sing booth when not performing onstage. In older productions the Chorus/booth singers typically covered the vocal heavy roles: Grizabella, Jennyanydots, Jellylorum; Old Deuteronomy, Gus, Munkustrap, Rum Tum Tugger.

The original London production used "Cats Chorus" to cover the unnamed swing characters, however in most productions every character onstage is a named role.

The term "Walking Cover" refers to a specific swing track, in which an actor covers the roles of Old Deuteronomy and Gus / Bustopher Jones. These roles are not dance intensive, and the Walking Cover does not generally also cover the dancing roles.

Standbys generally cover the principal roles while Swings cover the dance-intensive ensemble roles. While Swings often cover many tracks, Standbys may only cover a couple - generally the more vocally demanding roles (for example one standby might cover Jennyanydots / Jellylorum / Grizabella), leaving Swings to cover the featured dancing roles. The term "Standby" is used in the Broadway production in particular instead of "Swing".

Some productions simply label the performers without named roles as "Ensemble". In most shows, this would indicate the chorus, but in Cats as every character usually has a name, no matter how small the role, "Ensemble" refers to Swings.

Vacation swings and emergency covers are performers who join a production on a temporary basis. They are often called in on short notice due to the sudden unavailability of the full-time cast. As such, they are often former cast members who are already familiar with the track(s) they are standing in for.

In most productions, one or more of the swings will also be the dance captain. The dance captain is responsible for overseeing and maintaining the standards of all the choreography in the show. They are required to know the movement and choreography (called a "track") for every single character in the show because they are responsible for teaching the tracks to new cast members and giving notes when current performers aren't adhering to the original steps. They also work closely with the stage managers to coordinate rehearsals.

A split track is when a performer plays multiple tracks (typically no more than two or three) onstage in the same performance. This is done either by combining multiple characters into one hybrid character or by doubling roles that were not meant to be played by the same performer (for example Alonzo playing Macavity if Plato is cut). Split tracks are rare and only happen when there are not enough performers available to cover all the onstage tracks. This is when a swing would step in and cover multiple tracks simultaneously. 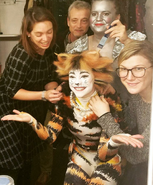 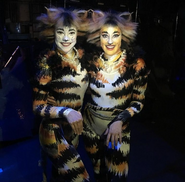 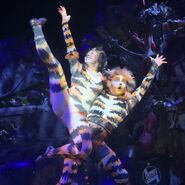 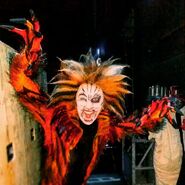 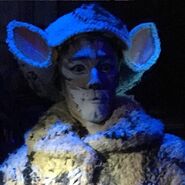 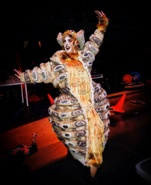 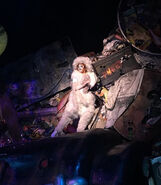