Duane Alexander
The 2009 South African production of Cats opened in 2009, and was effectively a revival of the earlier 2001 production that closed in 2005 after a world tour.

The original lighting design was by David Hersey, with this new associate design by Richard Neville and Greg Yates of Mandylights. This design was created in 2008 for the South Korean production, which formed the basis for the 2009 South African Production. The local associate designer in South Africa was Denis Hutchinson.[2] 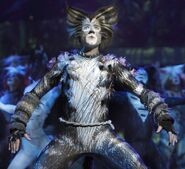 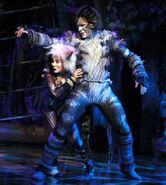 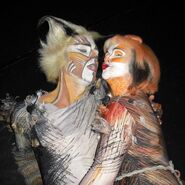 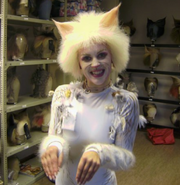 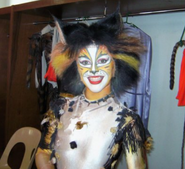 "The South African hit production of CATS is back this year at Teatro at Montecasino from 26 September - 22 November 2009 and Artscape Opera House from 29 November 2009 - 10 January 2010. Eight years ago Pieter Toerien produced the original South African hit production of CATS at Artscape in Cape Town and at the State Theatre in Pretoria. The show was groundbreaking and launched many of its cast to stardom on international tours of the Far East. CATS sold-out every night and there were many who did not get a chance to experience the magic. Pieter Toerien is very happy to announce that CATS will be back to grace the South African stages in Johannesburg at the Teatro Montecasino and in Cape Town at Artscape Opera House. CATS 2009 will feature a new generation of talented South African performers eager to make CATS bigger and better than ever![3]"

A large cast disguised as every imaginable variety of furry feline gives a high-energy performance set to the popular music of Andrew Lloyd-Webber.  The costume design on its own is something to behold.  The ‘cats’ are wrapped in plush layers of fur, their fluffy ears and tails jiggle and wiggle as they dance, flip and prowl through their routines. Their sculpted bodies are accentuated by skin tight body stockings painted in a variety of catlike fur colours and patterns.  It’s the cast’s dynamic dancing and enthusiasm that makes the show truly special. The dancers are lithe and perform breathtaking sequences, tumbles and jumps throughout the nearly three hour show.  The choreography is inspired by cats which original choreographer, Gillian Lynne, says are, “At once aloof, hypersensual, cold, warm, completely elastic and mysterious.”

Most of the musical’s lyrics are based on T.S. Elliot’s poetry from Old Possums’ Book of Practical Cats. It tells the catty tale of lust, love, power, magic and rebirth. The tribe of Jellicle cats reunite once a year for a raucous ball celebrated through song and dance. Throughout the merriment we are introduced to a variety of cats with quirky personalities that sing about their lives filled with high adventure and drama. Macavity cat is the powerfully built villain that terrorises the clan throughout the night’s festivities. At the end of the ball, the leader of the tribe, old Deuteronomy, will choose a cat that will be reborn into a new Jellicle life.

All this action takes place on the stage that has been transformed into a giant junk yard filled to the rafters with recreated scrap yard paraphernalia. The cast use the old tires, drums, an oven, and heaps of layered junk to perch on, crawl around, and play in; just the way cats turn your lounge into their playground. Combined with the elaborate lighting and soundscapes, the overall effect is very powerful, mostly effective, but at times simply overwhelming. The complex dancing sequences are sometimes lost in the very busy background and the action becomes a bit chaotic and tiresome.

Very entertaining is the dancing duo of Mungojerry, played by Grant Almirall, and Rumpleteaser played by Chireen Fereirra. The nutty duo performs a funny and acrobatically breathtaking dance which is an instant crowd pleaser. An outstanding performance is also delivered by Darren Stack as Macavity as he takes on the clan in a dangerous-looking but very impressive fight sequence.

One of Cats’ weaker points is the singing. Often the vigorous dancing appears to muffle the sound from the singers’ microphones, and the lyrics are lost, which is a shame as the quirky words are very much part of what makes Cats unique. Angela Kilian, as the old glamour cat Grizabella, bravely takes on the almost impossible task of singing the popular song, Memory, which was immortalised by Elaine Page in the original Cats production in the 80’s. It is a very tall order to follow and expectations are high. Kilian clearly has a beautiful singing voice but somehow the performance lacks conviction and it comes out a little flat.

Exceptional is the singing by Growltiger and Griddlebone, played by Robert Finlayson and Anne-Marie Clulow, during their duet in Growltiger’s Last Stand. Their singing finally makes you feel like you are listening to something very special being performed by consummate professionals. Spectacular also is the choreography and design of Growltiger’s Last Stand, during which Growltiger is caught up in a battle with the Siamese.

Jaco van Rensburg as the magical Mr Mistoffelees delivers a breathtaking dance and magic act as he conjures up the kidnapped old Deuteronomy in flashes of light and smoke. Rum Tum Tugger, played by Earl Gregory’s, rendition of this signature song fails to impress. However his performance as the raunchy womaniser throughout the show is very dynamic and displays flashes of the genius of Rocky Horror’s Frank N Furter.

After a bit of a slow first half, with the dance sequences that carry on somewhat too long, the second half presents itself as much smoother and far more interesting. The ending is spectacular as may be expected.

Lovers of Cats, Andrew Lloyd-Weber, flashy musicals, and all thing feline will enjoy this extravagant production. If you’re more into stylised, simplistic, and sweeping dramas with deep psychological and social messages, this might not exactly be your idea of theatre. However, bear in mind that it is often the production of large scale musicals suited to the masses, that makes it possible for committed producers, like Toerien, to bring us the more avant-garde plays such as God of Carnage, which may otherwise not have seen the light of day.

CATS run at the Artscape Theatre until 10 January 2010.