T S Eliot
"Skimbleshanks: The Railway Cat" is an upbeat musical number that introduces the titular Skimbleshanks. He is the cat who runs - from his point of view, at least - the overnight train from London to Glasgow.

As the quiet melancholy of Gus' reprise comes to an end, Old Deuteronomy calls for a change of pace and wakes up Skimbleshanks, who has been dozing on the car boot. Skimble's number is uptempo and fun. He recounts his life as "The Railway Cat", with all the cats collaborating to act out the crew and passengers on Skimble's train to illustrate his story. The cats collect bits and pieces of junk and assemble them into the shape of a locomotive engine, but just before Skimble can present his masterpiece to Old Deut, it falls apart as the cats lose coordination and concentration. But with a laugh and a shrug, Skimble moves on. The number ends on a joyous mood, only to be interrupted by the arrival of Macavity.

The lyrics for "Skimbleshanks: The Railway Cat" are taken entirely from the T S Eliot poem of the same name from Old Possum's Book of Practical Cats (1939). The poem itself borrows the metre from Rudyard Kipling's "The Long Trail".[1] The lyrics have remained unchanged over the years, except for Broadway-based productions having the ensemble sing an additional line at the end (italicised in the Lyrics section).

"Skimbleshanks: The Railway Cat" is an energetic number, matching Skimble's pace as he scurries around making sure the train is running smoothly. It features many verses consisting of fast-paced and wordy rhymes, interjected by a few brief refrains ("Skimbleshanks the Railway Cat / The Cat of the Railway Train") that are rooted in Skimble's leitmotif.[2]

The opening refrain is set to a tricky 13/8 time signature with a tempo of 98 beats per minute ("lively"). As the patter verses begin, the meter shifts to 4/4 and the tempo speeds up to 144 beats per minute ("vivace"). The meter reverts back to 13/8 every time the refrain is revisited.[3]

The song is primarily composed in the key of E major, but is transposed to F major in the final third act as Skimble's train is assembled. There is a temporary change in the meter to 2/4 during this transition.[3] The reprise at the end is interrupted by a crash and Macavity's leitmotif.

There's a whisper down the line at 11:39
When the Night Mail's ready to depart
Saying "Skimble! Where is Skimble?
Has he gone to hunt the thimble?
We must find him or the train can't start!"

All the guards and all the porters and the station master's daughters
Would be searching high and low
Saying "Skimble! Where is Skimble?
For unless he's very nimble
Then the Night Mail just can't go!"

At 11:42 with the signal overdue,
And the passengers all frantic to a man
That's when I would appear, and I'd saunter to the rear
I'd been busy in the luggage van

Then he gave one flash of his glass green eyes
And the signal went all clear!
They'd be off at last for the northern part
Of the Northern Hemisphere!

He would watch you without winking
And he saw what you were thinking
And it's certain that he didn't approve
Of hilarity and riot, so the folk were very quiet
When Skimble was about and on the move

You could play no pranks with Skimbleshanks
He's a cat that cannot be ignored
So nothing went wrong on the Northern Mail
When Skimbleshanks was aboard!

It was very pleasant when they found their little den
With their name written up on the door (Woo! Woo!)
And the berth was very neat, with a newly folded sheet
And not a speck of dust on floor

There was every sort of light
You could make it dark or bright
And a button you could turn to make a breeze (Woo! Woo!)
And a funny little basin you're supposed to wash your face in
And a crank to shut the window should you sneeze

Then the guard looked in politely
And would ask you very brightly
"Do you like your morning tea weak or strong?"
But I was just behind him and was ready to remind him
For Skimble won't let anything go wrong!

When they crept into their cosy berths and pulled up the counterpane
They all could reflect it was very nice
To know that they wouldn't be bothered by mice
They could leave all that to the railway cat
The cat of the railway train!

They might see me at Dumfries if I summon the police
If there was anything they ought to know about!
When they got to Gallowgate, there they did not have to wait
For Skimbleshanks would help them to get out!

And he gives you a wave of his long brown tail
Which says "I'll see you again"
You will meet without fail on the Midnight Mail,
The cat of the railway train!

You will meet without fail on the Midnight Mail,
The cat of the railway train! 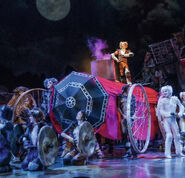