Male
Skimbleshanks is played by Steven McRae in the 2019 Cats movie.

Skimbleshanks is one of the candidates for the Heaviside Layer. He is introduced at the Jellicle Ball by Munkustrap, and proceeds to lead the cats in an elaborate tap routine as they perform "Skimbleshanks: The Railway Cat". Skimbleshanks is kidnapped by Macavity at the end of his number, but escapes the kidnapper with Jennyanydots, Bustopher Jones, and Gus towards the end of the film.

He is a ginger tabby cat who wears red overalls and a red train conductor hat. 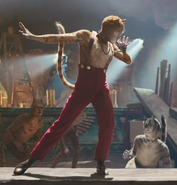 Feel free to add any headcanons or theories you have about Skimbleshanks. But don't delete other people's ideas.