Skimbleshanks is a featured character in the musical Cats. He is an upbeat ginger tabby known as "The Railway Cat" who works aboard the Night Mail, a British West Coast Main Line train which ran from London to Scotland.

Skimbleshanks is one of the adults of the tribe, always looking out for the kittens whenever danger is near. When not in "protector" mode, he is a jolly and cheerful cat, often seen dancing and being silly with the younger toms. In the original London Production, he is even seen bouncing on a mattress, using it as a trampoline during the opening number. He is a very animated character and can be remembered by his signature gigantic smile and bright personality.

Despite his jovial nature, Skimbleshanks is initially wary of Grizabella and prevents the kittens from touching her. However by the end of the musical, he is just as moved by Grizabella as the other cats, and touches and accepts her.

In most productions, Skimbleshanks is portrayed as one of the older cats, similar to Jennyanydots in age, and the two are sometimes implied to be a couple. Some productions however, portray him as a young adult.

Skimbleshanks has a variety of lines in "Jellicle Songs for Jellicle Cats" and "The Song of the Jellicles". His main feature comes about in Act 2, when he is introduced in "Skimbleshanks: The Railway Cat".

In his song, Skimbleshanks recounts his life as the cat aboard the British West Coast Main Line train a.k.a the Night Mail. He works diligently keeping the watch, mousing and helping out aboard the train. He takes great pride in his work and considers himself very important, claiming that the train cannot operate without him.

Skimbleshanks appears in the ensemble throughout the show, before he dons his uniform waistcoat for his number, "Skimbleshanks: The Railway Cat".

The following names have also been used for the character of Skimbleshanks in various international productions:

As with most of the featured characters, Skimbleshanks has his own instrumental motif. Like the character, the music is bright and upbeat. It is set to a tricky 13/8 time signature and underpins the refrains of his eponymous song. The motif makes a reappearance when the actor playing Skimbleshanks comes out to take his final bow.

Skimbleshanks is a ginger tabby cat, with a "long brown tail" and "glass green eyes". His unitard is usually a shade of cream, with ginger and brown markings. Usually his costume does not include black or solid lines, instead being painted or sponged to create texture. He has a neatly groomed wig with distinctive tabby stripes, often including long "Mutton-Chop" sideburns.

For his solo number, Skimbleshanks adds a waistcoat, with a shirt collar and pocket watch. He also changes his soft brown armwarmers for grey cable knit warmers with elbow patches. This additional costume tells us about his important job on the railway - the smart shirt collar and waistcoat, and particularly the pocket watch, tell us he has authority to make sure the train leaves on time. However the grey armwarmers with the practical elbow patches say he works manually, to the point his clothes need reinforcement. Finally he wears an oversized bell, which marks him as a cat who is cared for by the humans that he considers his colleagues. 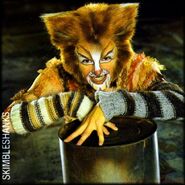 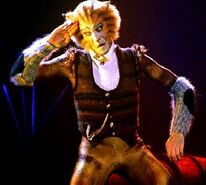 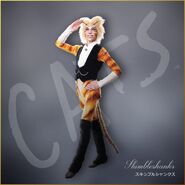 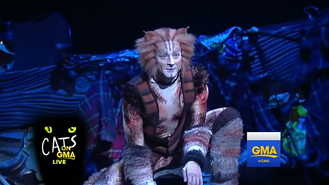