Kitten
Syllabub is an ensemble character in the 2019 Cats movie. She is portrayed by Jonadette Carpio. Similar to the Oasis of the Seas production, the character's name is spelled with a "y" instead of an "i".

She is a feisty and playful kitten.

Syllabub is present in all the ensemble dances. She has several solo lines in "Jellicle Songs for Jellicle Cats". During "The Rum Tum Tugger", she joins the other queens in swooning over the titular Rum Tum Tugger and squeals over him at the end of his song. When Grizabella first appears, she stares at her with a wary frown but is not openly hostile towards her like the other cats. She enthusiastically gives Mistoffelees a drum roll before his song and, unlike the older cats, is very impressed by his magic tricks.

Syllabub is a tiny bengal tabby. She has a tuft of hair that sticks up on the top of her head. Her collar is black with a gold tag. 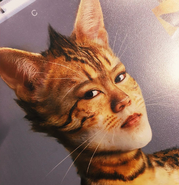 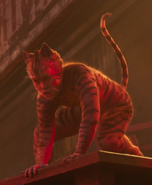 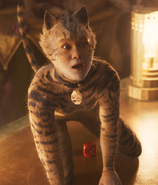 Syllabub in awe of Misto's magic

Feel free to add any headcanons or theories you have about Syllabub. But don't delete other people's ideas.