Sillabub is a supporting character in Cats. The youngest kitten, her innocence and compassion plays an important role in Grizabella's search for acceptance.

Sillabub originated in the Broadway production as an alternate for the original London character Jemima, but in some productions she has a distinct design and sometimes appears as well as, rather than instead of, Jemima.

Sillabub is a sweet, affectionate, innocent kitten, typically the youngest of the tribe. She gets along with the entire tribe thanks to her friendly and welcoming disposition; the older cats are protective of her while the younger cats enjoy playing with her. Despite her age, Sillabub demonstrates a deep sense of empathy and intuitive understanding, particularly with regards to Grizabella. Because of this, she is telepathically selected by Old Deuteronomy to relay his message of Happiness halfway through the show, possibly hinting at her mystical nature.

Compared to her alternate, Jemima, she is often portrayed as more outgoing and playful. The casting call for the 5th US tour specifically mentions that she idolizes Bombalurina and has a crush on Rum Tum Tugger.

Sillabub is one of the kittens who, in her innocence and with compassion, repeatedly reaches out to Grizabella - her attempts at contact always being stopped by the older cats. In earlier productions, she also sang a line in the reprise of "Grizabella the Glamour Cat", remarking on Grizabella with curiosity and wonder.

During "The Moments of Happiness", Old Deuteronomy telepathically channels his sage wisdom through Coricopat and Tantomile, to Sillabub who sings a reprise of "Memory". Later, when it is time for Old Deuteronomy to make the Jellicle Choice, she sings another "Memory" reprise known as "Daylight". Unlike Grizabella's melancholic rendition, Sillabub's version of "Memory" is hopeful and yearning. When Grizabella makes her final entrance, Sillabub and Old Deuteronomy are the only cats who do not turn away from her. Sillabub also joins Grizabella for a small verse in "Memory", encouraging the collapsed Grizabella to get up and keep singing. Vocally, she is known for her high, clear soprano.

Sillabub participates in all the ensemble dance numbers, usually interacting the most with the other kittens such as Victoria. She is a fan of the Rum Tum Tugger and joins the other female kittens in swooning over him. In some productions, she is included in a magic trick during "Magical Mister Mistoffelees".

The Japanese production of Cats includes both Jemima and Sillabub, with the role that is typically either Jemima or Sillabub given to Sillabub. Jemima is not a kitten in this production and is instead featured as one of the Gumbie Trio (with Jellylorum and Tantomile) and sings "Grizabella the Glamour Cat" with Jellylorum; Sillabub is a newborn kitten and sings the "Moonlight" and "Daylight" refrains, as well as "Memory" with Grizabella. She is also the first cat to touch Grizabella (instead of Victoria).

Some productions, notably Australian based, include both Sillabub and Jemima. In these instances, it is Sillabub who is the soloist who sings in "Memory", and Jemima is a less prominent ensemble dancer or a named swing.

The name "Sillabub" was conceived by T S Eliot as a blend of the words "silly" and "Beelzebub" i.e. "silly devil".[1] It may also be a play on the name of an English beverage, Syllabub, that was popular from the 16th to the 19th centuries, made of whipped cream and sherry. The spelling variant Syllabub has been used in the Oasis of the Seas production and the 2019 Cats movie.

The following names have also been used for the character of Sillabub in various international productions:

Sillabub's costume can be more cream/brown-based than the reddish colours of Jemima. Broadway Sillabub looks a lot like Bombalurina, particularly in the original cast press images, with the key difference being Sillabub wears armwarmers while Bombalurina has gloves. Sillabub has armwarmers in all productions with a dedicated "Sillabub" design. However, since the release of the 1998 film, the use of the London-style costumes worldwide has increased. This has led to the character named "Sillabub" wearing the "Jemima" costume, the only difference being their name.

The Japanese version of Sillabub is notably different, being a pale cream/gold cat without any black hatching at all. She appears alongside Jemima, who is a calico cat. Neither costume design is close to John Napier's original Jemima design. 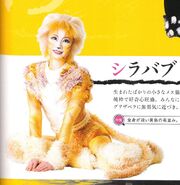