Dancer
The Great Rumpus Cat is a featured character in Cats. He appears only in "The Awefull Battle of the Pekes and the Pollicles", where he is the hero in a short play put on by the Jellicles to entertain Old Deuteronomy.

In universe, the Rumpus Cat is not a "real" character, but a character from a story, similar to Growltiger and Griddlebone. Whether the origins of the story are meant to be real, legendary or fictional is up to interpretation.

The Japanese production uses the name "Rumpus Cat" for an ensemble cat.

As the Rumpus Cat only appears in the context of "The Pekes and the Pollicles", his only interactions are with Munkustrap, the story's narrator. He is very enthusiastic but somewhat incompetent; he misses his cues, misunderstands commands, and only just avoids kicking Munkustrap. Nevertheless, the Pekes and Pollicles are suitably intimidated by his presence.

"The Awefull Battle of the Pekes and the Pollicles" is presented as a play put on by the Jellicle Cats to impress and entertain Old Deuteronomy. It features the Rumpus Cat as a superhero-like figure who saves the day by single-handedly scaring away two warring dog tribes. Within the Cats universe, the story is likely fictional, or at least greatly exaggerated given its far-fetched nature, meaning that the Great Rumpus Cat is likely just an urban legend. The Rumpus Cat is played by one of the tall ensemble toms which, depending on the production, is often Alonzo, Plato or George.

The ensemble Rumpus is primarily a dancing role. With the reintroduction of "The Pekes and the Pollicles" in the Japanese production in 2018, he also doubles as the song character, during which he dons a "superhero" costume complete with a cape and "R" chest logo. 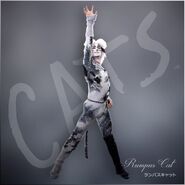 The 2016 Broadway revival changed the context of "The Pekes and the Pollicles". Rather than being performed to entertain Old Deuteronomy prior to the "Jellicle Ball", the number is used as Gus's reminiscence in place of "Growltiger's Last Stand". Gus performs a very different take on Rumpus Cat in a long, flowing cloak. These changes were incorporated into the subsequent international tour and 6th US tour.

The word "rumpus" means "a noisy disturbance" - appropriate (albeit ironic) for the cat who stopped a commotion in his neighbourhood.

The following names have also been used for the character of Rumpus Cat in various international productions:

The Great Rumpus Cat is portrayed as a kind of superhero to the Jellicles; as such, his appearance is stylised, with a glowing red eye-mask as eyes, a thin tail and a sleek black coat. On his chest is a Superman-style "R" logo.

In the original London production in 1981, Alonzo did not wear a separate costume for Rumpus, only the logo was detachable over a black costume. However as the show developed Alonzo soon established his own black and white costume, with the Rumpus Cat being a quick change suit pulled over the performer's regular costume.