Rumpleteazer is a featured character in the musical Cats. Mischievous and fun-loving, she is one half of a criminal duo alongside Mungojerrie.

Rumpleteazer originated in the London production and has been present in every production since. In the early years of the Broadway production however, she was presented as an in-universe fictional character rather than a member of the Jellicle tribe.

Rumpleteazer is a young, high-energy, mischievous character. She is usually depicted as a teenager or older kitten, typically veering towards more childish behaviour. Together with Mungojerrie, her partner-in-crime, Rumpleteazer often gets into all sorts of trouble such as petty theft.

In some early productions, including the original London show, she is mentioned as one of Macavity's rumoured agents in "Macavity the Mystery Cat". The lyrics in "Mungojerrie and Rumpleteazer" suggest that she lives with a reasonably wealthy human family. Despite her mischief-making, the other cats do not seem to hold a grudge against her.

According to 1998 film actor Jo Gibb:

"Mungojerrie and Rumpleteazer are the two naughtiest cats...We're always doing what we shouldn't, being where she shouldn't be, getting up to mischief, and creating a hassle for everyone else. But Rumpleteazer is lovable at the same time as being naughty and cheeky. She's always getting a clip around the ear from the older cats, but they like her."[1]

Rumpleteazer shares a song with Mungojerrie aptly named "Mungojerrie and Rumpleteazer". In the song, they boast about their reputation for trouble-making. She usually plays the lead Peke in "The Awefull Battle of the Pekes and the Pollicles". During "Skimbleshanks: The Railway Cat", Rumpleteazer instigates one of the kittens - usually Electra or Carbucketty/Pouncival - into switching places with Cassandra which, much to her amusement, causes said kitten to be reprimanded by Skimbleshanks. In smaller productions that cut the minor female kittens Electra and/or Etcetera, Rumpleteazer joins the other kittens in swooning over Rum Tum Tugger, and is sometimes the one who squeals hysterically at the end of Tugger's song.

The character first appeared in the T S Eliot poem titled "Mungojerrie and Rumpelteazer", published in Old Possum's Book of Practical Cats (1939). She was originally implied to be a male cat ("we are plausible fellows"), though she has always been depicted as female in the musical and its adaptations.

The spelling of her name has varied over the years. The original poem gave her name as "Rumpelteazer", while the 1998 film credits her as "Rumpleteazer". Both spellings are common in US and UK productions. The "Rumpleteaser" variation, though rare, has also been used.

The following names have also been used for the character of Rumpleteazer in various international productions:

Rumpleteazer is a striped tabby cat. Her costume generally features orange, yellow and black stripes on a white base. However in productions based on the Broadway version, she is a much paler cat, primarily white with light orange and grey stripes, due to her evolving from Etcetera.

Her featured song costume consists of stockings attached to a leotard in bright calico colours and a string of stolen Woolworth pearls worn around her neck. She sometimes wears a diamond collar or a belt.

In the original London production, Bonnie Langford wore her trademark bright ginger hair in high buns to suggest cat ears, as did several other female characters. Gradually this was replaced by wigs, but some productions held on to the bun styled ears rather than a standard "Cats" wig. 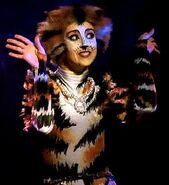