The Street Cat version of Rum Tum Tugger is the hip-hop alternate to the more common rockstar version of the character. This take on Tugger was used in several productions between 2014 and 2016, but has since been phased out in favour of the original.

Similar to his rockstar counterpart, he has two vocal solos in the show: "The Rum Tum Tugger" (rap version) and "Magical Mister Mistoffelees"; as well as a duet with Munkustrap in "Old Deuteronomy". His eponymous number was rewritten to include rap sections and an additional dance break for Tugger to show off his break dancing.

The Rum Tum Tugger is a rebellious young cat who clowns around for attention. He enjoys being in the spotlight and has a small fan following of younger kittens and a few queens. His antics do not impress the more mature cats such as Munkustrap, and they are fed up with him and his disobliging ways. Although Mistoffelees does not seem to care for his antics initially, they appear to be close and Tugger calls Mistoffelees his "bestie" .

He is indecisive and demanding, and only likes what he finds for himself. There is nothing he enjoys like a horrible muddle. He sometimes nicknames the other cats, calling Old Deuteronomy "Old Deut" and Mistoffelees the "magi-coolest cat".

For the 2014 London Palladium production, Andrew Lloyd Webber announced that he found the original Rum Tum Tugger "rather boring" and would update the character to a "street cat",[1] giving him a rap song and hip hop choreography. Tugger's eponymous rock song was thus rewritten, with the new hip hop number using rephrased elements of the original poem combined with rap verses created by Antoine Murray-Straughan.

These alterations did not affect Tugger's main role and he still sang the same vocal parts as the original. It did however have distinct changes on the dynamics within the show. As a younger cat, Street Cat Tugger appears to rank below Mistoffelees and Mungojerrie in the tribe's hierarchy, and the other kittens enjoy his mischief-making. He spends much of the show removed from the ensemble and aloof, building fewer interactions than between other characters, though he has a lot of interactions with the audience.

Between 2014 and 2016, he was included in each new production of Cats, notably both Palladium runs, the Blackpool production, the Paris revival, the Australia/New Zealand tour and the 2016 UK/Europe Tour. "Street Tugger" began to be phased out in 2016, starting with the Broadway revival which reintroduced the original Tugger. There are currently no productions running that use Street Cat Tugger.

The Rum Tum Tugger is a tiger striped cat. He wears his wig in braids, a backwards black snapback, a printed vest top, gold/silver chain necklaces, and black and yellow leopard spotted drop pants over a tiger print unitard. He wears fingerless gloves and black or gold running shoes. 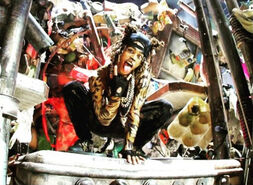 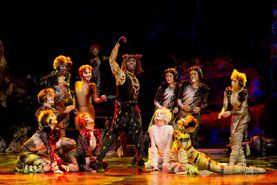 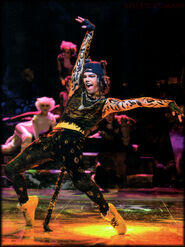 Tugger's update was met with criticism[2][3] from both critics and theatre fans condemning the re-working of the character into a dated and offensive cliché. The character was eventually phased out from 2016 onwards, with the Broadway revival and all major productions following it using the original Rockstar Tugger rather than the Street Cat version.