Heindel was commissioned in 1987 by Andrew Lloyd Webber to paint impressions from the musicals Cats and The Phantom of the Opera. 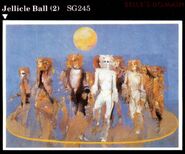 Fine Art prints of these works were sold at the London and Broadway productions.