Ria's musical theatre credits include: Eva Peron in Evita, Grizabella in Cats, Fantine in Les Miserables, The Narrator in Joseph, Svetlana/Florence in Chess, Carla/Necrophorus in Nine, Ida in Honk, Josephine/Monica in Romance Romance, Kim in Personals, Petra in A Little Night Music, Robin in Godspell, Emma West in A Twist Of Fate and Anita in West Side Story.

She created a role of Norma Desmond in the original workshop of Sunset Boulevard at Sydmonton. Worked closely with Stephen Sondheim in his new musicals master classes at St Catherine's collage Oxford. And was proud to be chosen to perform at the Voices Of A Nation concert to celebrate the opening of the Welsh Assembly.

Concert work has taken Ria all over the world. She regularly guests with orchestras in Singapore, France, South Africa and Denmark, as well as appearing in the U.K.

Recent concerts include: A Night Under The Stars with Bryn Tyrfel, Fantine in Les Miserables, Cardiff Castle, The Wonderful World of Rodgers and Hammerstein, Birmingham and Glasgow, Soloist in Black Goes With Everything, celebrating the lyrics of Don Black and Miss Leading Ladies, which she co-devised with her brother Ceri Dupree.

She has recorded her own television show "For One Night Only With Ria Jones" for BBC Wales. Has appeared on three Royal Variety shows for the BBC, as well as guesting on many chat shows on Welsh television.

Recordings include: Les Miserables, (Manchester cast recording), Personals, A Twist Of Fate, A Tribute To Hal Prince (live cast recordings) and most recently as a guest soloist on the C.D. "My Way" with trumpeter Pier Nielsen, which has now gone platinum. 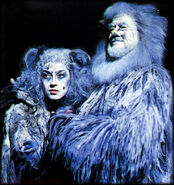