The Raffish Crew is Growltiger's comically incompetent pirate crew. They appear in Gus' dream sequence, "Growltiger's Last Stand". This sequence has been cut from several prominent productions, including the 1998 movie and the 2016 Broadway revival.

In the London production, the pirate crew consisted of Rum Tum Tugger, Skimbleshanks, Munkustrap, Mistoffelees, Victor, and George. However, this varies occasionally with Alonzo replacing Victor.

Other productions have five rather than six crew, made up of Munkustrap, Mistoffelees, Skimbleshanks, Tugger, and Alonzo. Despite Tumblebrutus being named as the Bo'sun in the poem, the role is played by Munkustrap and the ensemble character Tumblebrutus is usually not part of the crew.

Other productions also include Mungojerrie such as Vienna 2019.

The Raffish Crew sing and perform the opening of the Growltiger sequence, usually being bullied by him as they introduce him and his exploits to the audience. Typically the smallest of them (usually Mistoffelees) will play a scared "cabin boy": cowering, repeatedly fainting into the arms of the others, and hiding behind other crew members. Once Griddlebone enters, Growltiger quickly shoos them away (on the line "as my raffish crew lay sleeping" etc.) and they retreat "below deck". In productions which include the Italian duet "In una tepida notte" they remain below deck and do not reappear; however, if "The Ballad of Billy Macaw" is sung, they will creep back out and join in the chorus.

The original production gave the Raffish crew "Home Made" looking costumes, the patterns drawn on in the same manner as the basic costumes. This, combined with the loose shapes suggested a recycled costume, similar to the Beetles or Pollicle costumes used earlier in the show.

The Broadway production, with a much bigger budget than the London production, used more complex construction methods and fabrics like satin, resulting in more glamorous, less "Home Made" crew costumes, while still based on the original designs.

For the 2014 London Palladium revival, Growltiger and Crew were re-designed along with their scene being re-written. Rather than big, bright pantomime pirate Cats, they were given a monochrome palette of pre-made commercial costume pieces, evoking Dickensian Victorian London Dock workers. This gritty look is much more real-world, and less suggestive of a Music Hall performance. This design has since been adopted by all replica productions that include the 'Growltiger' sequence, with the exception of the Oasis production: they retained the original designs until 2019, when the entire sequence was cut to shorten the run time. 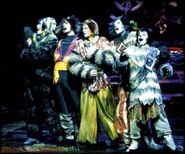 Now on a peaceful summer night, all nature seemed at play,
The tender moon was shining bright, the barge at Molesey lay.
All in the balmy moonlight it lay rocking on the tide--
And Growltiger was disposed to show his sentimental side.

His bucko mate, GRUMBUSKIN, long since had disappeared,
For to the Bell at Hampton he had gone to wet his beard;
And his bosun, TUMBLEBRUTUS, he too had stol'n away-
In the yard behind the Lion he was prowling for his prey.

In the forepeak of the vessel Growltiger sate alone,
Concentrating his attention on the Lady GRIDDLEBONE.
And his raffish crew were sleeping in their barrels and their bunks--
As the Siamese came creeping in their sampans and their junks...