Dancer, Acrobat
Pouncival is an ensemble character in the musical Cats. He is usually portrayed as a mischievous tom kitten, with the role primarily being that of a dancer and acrobat.

He originated in the Broadway production as an original character, but in subsequent productions often serves as an alternate version of the London character, Carbucketty.

Pouncival is typically portrayed as a young, troublesome, fun-loving kitten. He is often seen messing about and having fun with the other kittens such as Tumblebrutus, Electra, and Etcetera. He tends to be one of the more mischievous and impressionable characters.

In the 1998 film, he is shown trouble-making while dressed up as a beetle in "The Old Gumbie Cat", and taunting Grizabella twice, egged on by Tumblebrutus and Plato. The other cats sometimes find him bothersome, shooing him off when he gets in their way.

Pouncival is principally a dance role, with the performer also typically being a strong acrobat. His dancing is usually featured quite prominently during the "Jellicle Ball". As the first understudy for Mistoffelees, his performer needs to have strong classical technique as well as being able to pull off a mischievous kitten.

In many productions, Pouncival is an alternate name for the track otherwise known as Carbucketty, being one of the youngest kittens and functioning as an understudy for Mistoffelees. He first appeared alongside Carbucketty in the Broadway production, and subsequently replaced Carbucketty in most further productions. Since the release of the 1998 film, it has become common for the London Carbucketty costume to be used for the role named Pouncival.

For the 2014 London Palladium production, the cast included both Carbucketty and Pouncival. However the character who appeared onstage was actually a renamed George rather than a double of Carbucketty. This is the version of Pouncival used in the 2016 Broadway revival and in the 6th US tour.

The name "Pouncival" was invented by T S Eliot as a blend of "pounce" and "Percival", the latter being a reference to one of King Arthur's legendary Knights of the Round Table.[1] Spelling variants of his name include Parsifal (variant form of Percival).

Pouncival is a small, scruffy, Tabby and White kitten, with brown/black stripes and patches and hatching on a silver/grey base. Dependant on production, Pouncival can use one of three basic designs: his original Broadway look that was copied for the German production and others worldwide; a copy of Carbucketty based on the video's use of the London costumes with the Broadway names; or a look based on George since the Palladium production in 2014.

Pouncival's original costume is based on one of John Napier's designs that is a variation of the design used for Admetus, but in cool silver tones. He features loose markings on his left side, shades and patches rather than distinct shapes. His makeup usually features asymmetrical eyes, with the suggestion of an eye patch or stripe on his face, realised differently to the patch on Tumblebrutus in that he has heavier eye makeup within the patch.

The original design for Carbucketty has often been used for Pouncival. He has defined stripes on the right of his chest and his left hip, with tan patches as well as black hatching on a white/pale silver base. Carbucketty's design includes a defined eye patch that creates a strongly asymmetrical look. 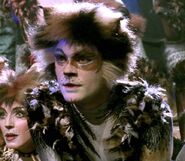 The design for George has not been used in many productions as the ensemble rarely includes the extra male cast. His design features long narrow stripes on his right thigh, and strong blocks of black on his left torso. He has a particularly distinctive wig, with central white bangs, a brown patch to one side and a black patch to the other, which is echoed in his makeup with patches over each eye. He often has a brown patch or smudge on his muzzle as well. 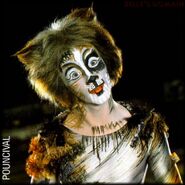