Plato is an ensemble character in Cats. He is an easy-going tom whose main role in the show is to be the ensemble identity of the actor who also plays Macavity.

Plato originated as an alternate for Admetus in the Broadway Production, in which several London characters were renamed. Most subsequent productions were based on the Broadway show and use the name "Plato" for Macavity's double.

Plato is generally a quiet and laid back tom who prefers to stay in the background. His explicit characterisation varies between productions, ranging from a slightly playful and immature teenage cat, to a "laconic, lackadaisical" adult.[1]

In the 1980s and 1990s, he was mainly portrayed as an adult, in the same age group as Alonzo and Cassandra, and did not dance the pas de deux with Victoria. This changed with the 1998 film however, which paired the name "Plato" with the young Admetus design and characterisation.

Since then, Plato is increasingly used as an adolescent character who can be seen playing pranks with the tom-kittens Tumblebrutus and Pouncival, as well as idolising the Rum Tum Tugger and trying to emulate him. This younger, teenage portrayal often does the pas de deux (sometimes called the "mating dance") with Victoria during the "Jellicle Ball".

Plato is an ensemble dancer whose main role in the show is to double as Macavity. In the original Broadway Production, Plato doubled as the Rumpus Cat as well. As Macavity, the performer is required to lift and throw another male dancer, Munkustrap, so Plato is usually particularly tall and strong. He sometimes dances the pas de deux with Victoria, and so needs strong classical ballet technique.

Plato sneaks off stage during "Gus: The Theatre Cat" so that the performer can change into Macavity. He returns during the "Magical Mister Mistoffelees" number.

"Plato" is mentioned in "The Naming of Cats" as one of the "fancier" but still "sensible" names. T S Eliot named him after the ancient Greek philosopher of the same name. Spelling variants of his name include Platón (Spanish).

Plato has two distinct different designs. The original Broadway design has a lot of grey and browns, with very few distinctive features apart from white stripes on his thighs. The same basic design was used for Victor in the London production. Photos of Plato are quite rare, as the actor was far more often photographed as Macavity.

In the 1998 film of Cats, many of the Broadway names were used while the costume designs were from the London production. Since then, the London design for Admetus is often used for Plato. London-style Plato/Admetus is a ginger/Light Brown and White tom. He has elegant eyeliner/eyebrows and brown 'patches' beneath his brows. He has a white belly with black and ginger tabby patterning, often with similar coloured fur over his shoulders. 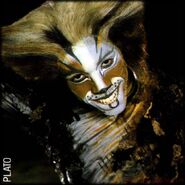