Old Deuteronomy is a principal character in the musical Cats. He is the wise and beloved patriarch of the Jellicle tribe.

Old Deuteronomy is the kind and just leader of the Jellicle tribe. He is described as being wise in his many years and is respected and beloved by most Jellicles. While he is "old and tottery" and "must go slow", he is fairly lively and dances along with a variety of songs performed for him. Old Deuteronomy is one of the larger cats, though he isn't mocked for his girth like Bustopher Jones is.

He is an ancient cat who has lived "many lives in succession", suggesting rebirth or longevity/immortality.[1] He also appears to have a spiritual connection with the Heaviside Layer, as well as some degree of psychic powers with which he guides the other Jellicles through dance and song. He is seemingly the only cat not affected by Macavity's hypnotic powers.

The T S Eliot poem "Old Deuteronomy" describes a bucolic English village where he lives peacefully. He seems to care about Grizabella from the start, trying to accept her and being disappointed when the other cats shun her, but she doesn't notice until the end. According to actor Ken Page, "He's probably the father of a lot of [the Jellicles]."[2]

Old Deuteronomy is one of the main characters in the show. As the head of the tribe, he is responsible for making the Jellicle Choice, choosing with cat will ascend to the Heaviside Layer. The character is first mentioned by Munkustrap in "The Invitation to the Jellicle Ball", but does not appear until his introduction in "Old Deuteronomy" in the latter half of Act 1. During intermission, Old Deuteronomy often remains seated on the giant tire and audience members are invited on stage to take pictures with him.

He opens Act 2 with "The Moments of Happiness". Towards the end of the musical, he is kidnapped by Macavity but is later brought back by Mistoffelees. Old Deuteronomy ultimately chooses Grizabella to ascend to the Heaviside Layer. He closes the show by addressing the audience in "The Ad-Dressing of Cats".

In the original London production, Brian Blessed played both Old Deuteronomy and Bustopher Jones; however in all other productions, Old Deuteronomy is not doubled with any other role. On Broadway, it is tradition for the role to be played by a black actor.

In a letter to his goddaughter, Alison Tandy, T S Eliot wrote:

Deuteronomy is also the name of the fifth book of the Old Testament. This, coupled with the character's old age, have led some international productions to invoke comparisons to the biblical patriarch Methuselah, who was said to have lived for 969 years.

The following names have also been used for the character of Old Deuteronomy in various international productions:

As with most of the featured characters, Old Deuteronomy has his own instrumental motif. The melody is simple and sentimental, reflecting the tenderness that the Jellicles feel towards Old Deuteronomy.

His eponymous song opens with a solo flute playing his melody, with each subsequent refrain building on this music. The motif is revisited during the "whirlygigs" section of "The Jellicle Ball", when Old Deuteronomy makes his way through the dancers and they surround him. It returns again in the instrumental opening of "The Moments of Happiness", leading straight into the character's solo. And finally, his melody bookends the Macavity fight scene, playing first when Macavity enters disguised as Old Deuteronomy, then again at the end when the tribe realise that they have to find the actual Old Deuteronomy.[4]

Old Deuteronomy is a large, old, grey cat. His wears a full, fluffy robe. His costume appears grey but is made of a mixture of greys, dull brown and black.

The actor who plays Old Deuteronomy usually appears in the ensemble during Jellicle Songs for Jellicle Cats. He wears an ensemble costume that resembles Munkustrap as a silver tabby, but with sparser, lighter stripes. Sometimes the actor is given looser fitting "pajama" style garments rather than a skin-tight unitard, as he is not expected to be a dancer. He is often referred to as "Young Deut" or "Chorus Deut", however the Broadway Revival has dubbed this character "Victor" (unrelated to Victor the ensemble character). See Here for Deuteronomy's ensemble costume. 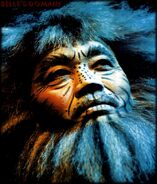 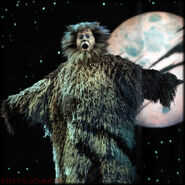