RCCL Oasis of the Seas

Opal Theater on the "Oasis of the Seas", from Fort Lauderdale, Florida, USA

This production of Cats is performed "in rep", alternating with a circus-style show, with many of the cast playing in both shows. While this version is produced by Royal Caribbean, the whole show is now based on the UK/European version of Cats with the exception that, like in every American production, the "Ballad of Billy McCaw" is replaced by the Italian aria "In Una Tepida Notte".

The costume designs are UK style, originally the US Troika Tour costumes were to be used, but with the Palladium production combining the properties of the UK Tour and the German Tent Tour, a full set of costumes became available and are used in this production. Troika are still involved with the costume maintenance. The set (NAP 18) is notably similar to the one of the German Tent Tour (NAP 19).

The production still uses the "Rockstar" original version of Tugger's character (instead of the "Street Cat" version that had its premiere in London in 2014). However, the choreography of the Jellicle Ball has been reworked.

The cast consists of 22 cats. The production uses the American names for the kittens: Tumblebrutus, Plato, Syllabub / Sillabub and Pouncival. As the show is "In Rep" on a cruise ship, there are no swings, and wig and costume maintenance is carried out by the cast themselves.

In August 2019, the new 10th cast began rehearsing an abridged, 90 minute edit of the show. In this new version, "Bustopher Jones", "The Awefull Battle of the Pekes and the Pollicles" and "Growltiger's Last Stand" have been cut. This version began performances on 29th November, following a refurbishment of the Oasis of the Seas. 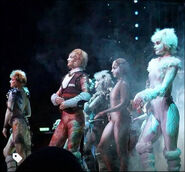 Opal Theatre, Oasis of the Seas 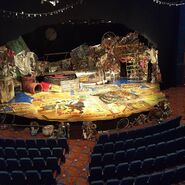 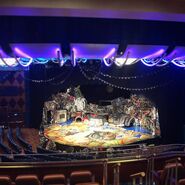 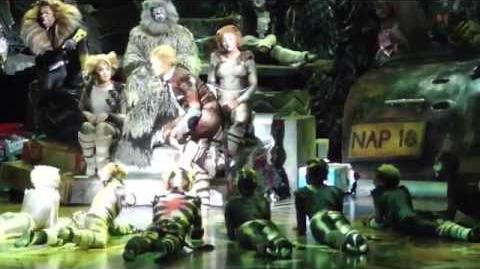 And There's Nothing at All to Be Done About That!
Robyn Tempest, Cast 10 Rehearsals Vlog

The Casts are known by numbers (eg. "Cast 6"). Official information about the casts for this production is very hard to find as there is no official website or programme.

Erica Hansen, who plays Jennyanydots, is the only actress who has been in a production of Cats (US National/Troika tour) before; all the others are making their debuts in Cats.