Singer (baritone)
Munkustrap is a principal character in Cats. He is the leader of the tribe in the absence of Old Deuteronomy. In the musical, he fulfills the narrator role, breaking the fourth wall to explain the plot to the audience and introducing a few of the featured characters.

Munkustrap is a leader and protector to the Jellicle cats. He is responsible and brave, with a commanding presence, but is also genial and friendly when not alarmed by a perceived threat. He loves and enjoys the company of his tribe, who in turn hold him in high regard. In London-based productions, after fighting Macavity to save Demeter, they are often implied to be a couple.

While not as hostile towards Grizabella as some of the other cats, Munkustrap is still wary and considers her a potential threat. In some modern revivals, he intervenes and rebukes the young toms when they attack Grizabella.

In some London productions, and presumably those derived from them, he is depicted as the sensible older brother of Rum Tum Tugger and despairs of his wild sibling.[1][2] In US productions since the 2010s, he is said to be the son of Old Deuteronomy.[3]

According to the 1998 film actor Michael Gruber:

"Munkustrap is really the story-teller. He's entrusted with giving the information to the other, maybe younger cats who have not been to the Jellicle Ball before. He gets up and says exactly what they're here to do. He's also caretaker of the kittens. He wants to make sure everybody's safe; in all the Macavity scares, he's there to protect the tribe. So he is the protector."[4]

Munkustrap is the narrator of the story. He opens the show when he crawls to the front of the stage, stands dignified and imposing, and sings the first line of "Jellicle Songs for Jellicle Cats". In "The Invitation to the Jellicle Ball", he breaks the fourth wall to explain the purpose of the Jellicle tribe's yearly meeting. Munkustrap then introduces Jennyanydots in "The Old Gumbie Cat", and Old Deuteronomy in the song of the same name.

For Old Deuteronomy's entertainment, Munkustrap directs "The Awefull Battle of the Pekes and the Pollicles", which he has clearly organised and rehearsed, but to his frustration does not go according to plan. If Old Deuteronomy is the wise and spiritual head of the tribe, Munkustrap is the practical and hands-on leader, organising defences and taking on Macavity without hesitation. In London-based productions, Munkustrap typically does most of the fighting against Macavity. In Broadway-based productions however, he is knocked out of the fight early on, with Alonzo then taking his place.

"Munkustrap" is mentioned in "The Naming of Cats" as one of the "peculiar, and more dignified" names. The Japanese production has speculated it may be a play on the English city of Manchester or Lancaster.[5] Another possibility is that it is a play on "monk strap", a shoe style that reached the height of its popularity in the 1920s.

The following names have also been used for the character of Munkustrap in various international productions:

Munkustrap is a silver/gray tabby. In some productions his costume has warm brownish tones to the greys, otherwise he is pure silver and black.

He is usually one of the tallest Cats in the tribe, physically imposing as the actor has to be strong enough to fight Macavity, which includes lifting and throwing another male dancer. 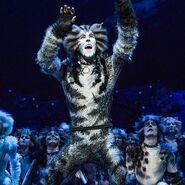