Mungojerrie is a featured character in the musical Cats. Mischievous and fun-loving, he is one half of a criminal duo alongside Rumpleteazer.

Mungojerrie originated in the London production and has been present in every production since. In the early years of the Broadway production however, he was presented as an in-universe fictional character rather than a member of the Jellicle tribe.

Mungojerrie is a a young, high-energy, mischievous character. He is mentioned as a rumoured agent for Macavity, but it seems he specializes in only petty theft. Despite his criminal activity, he is generally received well by other cats; many productions show other cats finding his antics irritating or amusing, with the more mature Jellicles showing disdain. He can be seen as idolising Rum Tum Tugger, wanting to copy his moves and get as much attention from the girls.

The Palladium production, which introduced Street Cat Tugger, showed an interesting reversal in their characterisations. Now Mungo seemed the older, more established cheeky, popular Tom, and Street Cat looked up to him for approval.

Mungojerrie shares a song with Rumpleteazer aptly named "Mungojerrie and Rumpleteazer". In the song, they boast about their reputation for trouble-making. Mungojerrie also has a number of lines in the ensemble songs, and he sometimes plays the lead Pollicle in "The Awefull Battle of the Pekes and the Pollicles".

When Cats first came to Broadway in 1982, the role of Mungojerrie was cut. Instead, the song "Mungojerrie and Rumpleteazer" was narrated by Mistoffelees who brought to life two "trash puppets", performed by the actors playing Coricopat and Etcetera, as entertainment for Bustopher Jones. In mid-1987, the Broadway show was overhauled and Mungojerrie became a full ensemble character as Carbucketty was cut from the show.

The following names have also been used for the character of Mungojerrie in various international productions:

Mungojerrie is an orange, brown, and black tabby cat. In London-based productions he often has prominent white spaces, suggesting a narrow white bib. These designs often coincide with Rumpleteazer having a bold colour palette to match, and they appear very similar. Broadway-based productions give Mungojerrie a much darker palette, with very little base white showing through, and similarly give Rumpleteazer a much softer, paler look, and it is only their song costumes that bring them together to the point one might be mistaken for the other.

His song costume consists of a vest top and stockings, usually made of a stretch velour that makes the colours appear particularly vibrant. London style song costumes give him leggings and sleeves similar to Rumpleteazer's song costume, while Broadway influenced costumes give him warmers that are bolder than his regular warmers. The original song costumes for "Mungojerrie and Rumpleteazer" consisted of a commercial tiger print fabric. The Broadway production re-imagined their solo completely, dressing them as "Puppets" made from the trash in the junkyard, similar to the Beetles, or the Pekes and Pollicles. Subsequent productions, however, reverted to the original concept of costume pieces thrown over the ensemble costume.

Original Design for the Song Costume 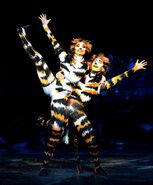