Mr. Mistoffelees is a featured dancer in the musical Cats. Known as "The Original Conjuring Cat", he is an enigmatic magician whose feats often astound the other cats and leave them in awe.

In the song "Magical Mister Mistoffelees", he is described as being a rather mysterious and clever conjuring cat, often found getting up to mischief or performing amusing tricks. Mistoffelees also has a competitive streak and is a bit of a show-off.[1] In early London-based productions, he would challenge Jennyanydots to a tap dance-off in "The Old Gumbie Cat".

Earlier productions of Cats depicted Mistoffelees as a full-grown adult and consummate showman. However more modern productions often portray him as a young tom, still exploring his magic powers and not yet fully confident in his abilities. Jacob Brent, who played the character in the 1998 film, described him as such:

"He's a bit of a rascal... A child prodigy of the tribe, brilliant in what he does but a little wacky at the same time. He's not an adult yet, but he's not a kitten, so he's at that in between stage... He has these magical powers, he doesn't quite know how to use them yet. But, he's learning."[2]

Mistoffelees' magic powers prove handy to the tribe throughout the musical, such as when he uses them to lift the car boot for Jennyanydots' entrance or when he lights up the junkyard during the "Jellicle Ball".

His main feature comes about in Act 2, when he is called upon by Rum Tum Tugger to use his magic to bring back the kidnapped Old Deuteronomy. This all takes place during the musical number "Magical Mister Mistoffelees", which is usually sung by Tugger and sees Mistoffelees perform an extended dance solo full of flashy special effects. His signature piece of choreography is the "Conjuring Turn" consisting of twenty-four consecutive fouettés (or pirouettes à la seconde, depending on the performer).

Dancers cast in the role generally have extensive ballet and gymnastics training. Because the technical dance skills required for the role trump the performer's vocal abilities, the show permits multiple vocal tracks for the character, allowing some performers who play him to sing quite a bit, while others do no singing at all.

His name was derived by T S Eliot from the German folklore demon Mephistopheles. Spelling variants of his name include: Metrøffelis, Mistopheles, Mefistofeliks, Mr Mistofeli.

The following names have also been used for the character of Mistoffelees in various international productions:

Mistoffelees possesses various magic powers, the main one being his ability to conjure up objects and even other cats. He is also able to create small explosions; in the 1998 film, this was depicted as him shooting lightning bolts from his hands. Throughout the musical, he demonstrates other forms of magic such as manipulating light and telekinesis. In the original Broadway production, Mistoffelees brings two life-size puppets made of trash to life. The Japanese production has him levitating one of the other cats during his song, while in the Chinese production he uses his magic to raise the giant tire for Grizabella's ascent.

In UK-style productions, Mistoffelees is credited as "Quaxo" up until his song,[3] where he is then revealed to be "Quaxo, otherwise known as Mr. Mistoffelees"[4] - his identity as "The Magical Mister Mistoffelees" remaining a secret up to that point. This is usually explained as "Mr. Mistoffelees" being Quaxo's stage name.[5][6]

In other productions however, Quaxo is an entirely separate character with no relation to Mistoffelees. In the original London production, a prominent feature of the performer's role, besides his eponymous song, was his tap-dance duel in "The Old Gumbie Cat". As a result, some early productions, particularly those based on the original Vienna production, attached the name "Quaxo" to the lead tap-dancing beetle, regardless of whether it was played by Mistoffelees or not.[7] Quaxo has also occasionally been an ensemble character in his own right, or the name used for a swing character.

Click here for the article about ensemble character Quaxo.

Mistoffelees is a black and white tuxedo cat. Though the original poem and his song describe him as black "from the ears to the tip of his tail" he is portrayed as black and white due to the technical limitations of stage lighting. His tuxedo markings suggest a classic stage costume for a magician or conjurer performing tricks.

His ensemble costume is not a solid black, but a grey base that is heavily "scribbled" over to give the impression of being black. He typically has a fluffy, white bib with the suggestion of a bow tie/collar. For his featured number, he changes into a black velvet outfit covered in crystals with a jacket wired with flashing lights. His song costume comes with a shorter tail as the long ensemble tail is a hazard when dancing. 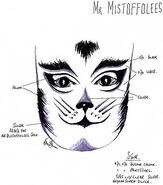 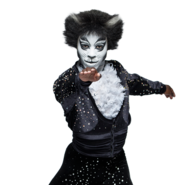 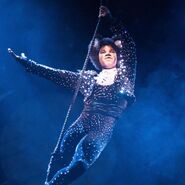