Trained primarily as a gymnast, Markham Gannon commenced his dance training at the Victorian College of the Arts at age seventeen. His theatre credits include the national tour of Hello Dolly!, Me and My Girl (Sydney) and sixteen months as the Doormat in Disney's Beauty and the Beast, where he understudied and performed the role of Le Fou. Marham also performed in My Fair Lady and the Sydney/Melbourne seasons of Showboat, understudying Pete/Jake. After discovering a new 'appreciation' for heights and bruised legs, Markham is thrilled to be the Circus Captain for this tour of Cats. He would like to thank all of the circus trainers, in particular Scott Grayland for his encouragement and invaluable knowledge of his artform. Markham dedicates his performance to the memory of his friend Dale Jewel. 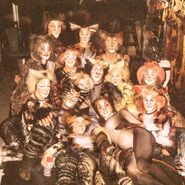 2010 (out of costume)
Community content is available under CC-BY-SA unless otherwise noted.
Advertisement