Marcus was born in Mamelodi, Pretoria, into a very musical family. He started singing at the age of 13 and joined the PACT Chorus as an ad hoc member in 1987. Four years later he joined PACTS¹s permanent chorus and sang with them until March 1994 when he became a member of the Cape Opera Studio. He had been a soloist in oratorio, including the Passion of Christ and the Coronation Mass. Opera productions for PACT as a soloist include Tholiwe and the Crocodile, Batsumi, The Hunters and Ntjilo, Ntjilo Bird of Peace. For Cape Town Opera he sang in Fidelio, The Consul, Tosca, La Boheme and Enoch, Prophet of God. He sang Mingo and Sporting Life at the National Arts Festival in Grahamstown, In 1997 he sang the role of Borsa in Rigoletto, followed by Normanno in Lucia di Lammermoor. Performed the roles of Whitey and Lulu in Hal Shaper's La Boheme Noir. In 1998 he toured Europe singing Sporting Life in Porgy and Bess for New York Harlem Productions. Since his return he has sung in Salome, Il Seraglio, Le Nozze di Figaro, Madama Butterfly, Il Matrimonio. He was appointed assistant director for Cape Town Opera, assisting in Aida, Hansel and Gretel, L'Elisir d'Amore and The Merry Widow. He was instrumental in the creation of the new folk opera, By the River. 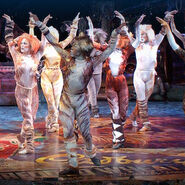