Andrew Lloyd Webber
The "Macavity Fight" is an action sequence which sees the tribe take on Macavity.

The entire scene involving Macavity is divided into two sections: the queens singing about him, and the action sequence in which Macavity himself appears. This article is about the latter, see here for the article about the song.

The queens finish singing about Macavity just as Munkustrap and several other toms return from their futile chase. Out of nowhere, a booming laugh is heard as Macavity reappears once again. This time however, he has his hench-cats seemingly escort Old Deuteronomy back to the tribe. The Jellicles are relieved to see their leader return except Demeter, who senses something is amiss. She lunges at Old Deuteronomy, exposing him to be Macavity in disguise. Macavity then attempts to take Demeter by force, however Munkustrap intervenes and a fight ensues. Initially Munkustrap fights him alone, but when he is injured, Alonzo steps up and is followed by many other cats. Outnumbered, Macavity retreats under the cover of a shower of electrical sparks, which puts out all the lights and leaves the Jellicles in the dark. Macavity disappears into the darkness ("Macavity's not there!") and the Jellicles lament over their missing leader ("We have to find Old Deuteronomy").

There are two main versions of the Macavity fight - one originating from the London production, and the other from the Broadway production.

In the original London production, Munkustrap does most of the fighting against Macavity. Towards the end, he is injured and Alonzo takes his place briefly before the other cats join in. This is the version used in the 1998 film (albeit with some cuts made to the scene). Since the film's release, it has also been used by most productions outside of the US.

In the original Broadway production, Munkustrap is knocked out of the fight early on, and it is Alonzo who takes the majority of the fight. Outside of the UK, most productions worldwide followed the Broadway version in the 1980s and 1990s. The 2016 Broadway revival was restaged to be more in line with the London style, with Munkustrap taking most of the fight. However, the music for the stage fight was reworked and the scene featured completely new choreography by Andy Blankenbuehler.

The "Macavity Fight" employs various recurring motifs. As the disguised Macavity enters and greets the tribe, the orchestra plays Old Deuteronomy's melody. It is abruptly interrupted by music from the instrumental opening of "Jellicle Songs for Jellicle Cats" as Demeter realises something is wrong. Demeter exposes Macavity to a pounding rendition of the verse material of "Jellicle Songs". The fight scene itself uses the recurring Jellicle theme in its various versions, includings its fugal and fragmented forms. After the fight, the tribe realise they need to find Old Deuteronomy and a solo flute plays his theme, bookending the scene.[1] 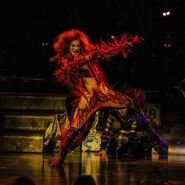 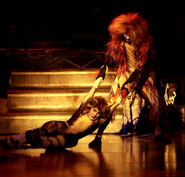 Munkustrap and Alonzo take on Macavity

The Jellicles stand up to Macavity

Macavity shorts out the lights