Macavity's Hench-cats are his two creepy assistants who kidnap Old Deuteronomy at his bidding. They are rarely seen in publicity for the show because their appearance is so brief.

They are usually played by the smallest ensemble boys i.e. Carbucketty/Pouncival and Bill Bailey/Tumblebrutus, though other ensemble members such as George or Electra have also played the hench-cats.

They are small, black, scruffy creatures, sometimes described as rats rather than cats. They wear masks onstage to disguise the ensemble characters, photos of their masks are even more rare than their costumes.

The 2016 Broadway Revival gave us a re-designed Macavity costume, and to accompany him his assistants also received new costumes. They lack the distinctive "Scribbled" markings, instead having soft airbrushed highlights, and they wear shoulder armour that somewhat suggests cockroaches. 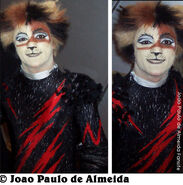 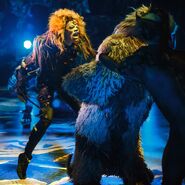 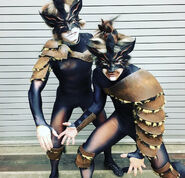 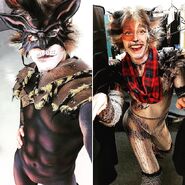 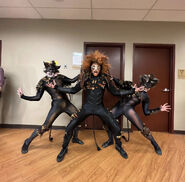 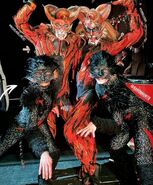 Oasis of the Seas, Cast 11 (2022)
Community content is available under CC-BY-SA unless otherwise noted.
Advertisement