Adult
Macavity is the main antagonist of the 2019 Cats movie. He is portrayed by Idris Elba.

Macavity's role has been greatly expanded from the stage version, with the character appearing throughout the movie. To complement these changes, he has been given a new motivation for disrupting the Jellicle Ball, namely his desperation to be the Jellicle Choice.

Macavity is charming but dangerous and deranged. He desperately wants to ascend to the Heaviside Layer and will stop at nothing to ensure that he is the Jellicle Choice. Similar to his stage counterpart, Macavity possesses the ability to teleport, though in the movie this extends to being able to teleport other cats as well, but is unable to use at the end of the film. He does not seem to have any of his other usual powers, using magical catnip instead of hypnosis to control the Jellicles.

Macavity is first seen watching the other cats from afar as they perform "Jellicle Songs for Jellicle Cats" for Victoria. He then approaches Victoria and tries to warn her off from the Jellicle Ball, but she went for it anyway to join the tribe (with a bit of help from Mistoffelees).

Throughout the movie, he kidnaps the contestants for the Jellicle Choice (Jennyanydots, Bustopher Jones, Gus and Skimbleshanks), thinking that this will leave Old Deuteronomy with no choice but to send him to the Heaviside Layer. Instead, Old Deuteronomy tells him that he will never be chosen because he has no soul. In his rage, he kidnaps Old Deuteronomy and brings her to Growltiger's barge, where his other captives are also being held. He tries to make Old Deuteronomy walk the plank but is thwarted when she is conjured off the ship by Mistoffelees.

In a last ditch attempt, Macavity grabs onto the rope hanging off the chandelier that carries Grizabella to the Heaviside Layer. However, his hands slip and he ends up falling and landing on top of Nelson's Column. He is last seen crying for help as he is unable to get down due to not enough power for teleportation.

Macavity is a reddish brown cat. He wears a torn-up coat and hat. He has bright green eyes and a scar on his face. 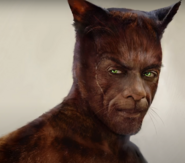 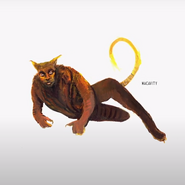 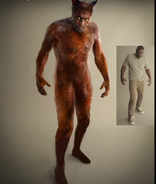 Feel free to add any headcanons or theories you have about Macavity. But don't delete other people's ideas.