Was trained and educated in Cape Town, after which she began an interesting journey of three years at the UCT (University of Cape Town) School of Dance, from which she graduated in 1998, majoring in classical ballet. Throughout her three years at University and for a short while thereafter, Katherine worked with the Cape Town City Ballet. In 1999 she joined forces with Juanita Yazbek and entered the corporate world continuing to do some musical theatre, cabaret work and a few operas. Her previous venture was Grease the Stadium Spectacular. Katherine is thrilled to be in Cats. 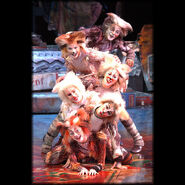