John Napier designed both the set and the costumes for the original production of Cats, creating the iconic Junkyard, and the ground-breaking conceptual costume designs of "Sketches of Cats", blending the feline and human elements of the characters in the show.

John studied fine art at Hornsey College of Art in the early 60s and subsequently theatre design at the Central School of Arts and Crafts under Ralph Koltai.

Musical theatre credits include: Cats, Starlight Express, Les Misérables, Miss Saigon and Sunset Boulevard. These productions have been presented on Broadway and around the world.

Other designs for the West End include: Time, Children of Eden and Jesus Christ Superstar. John designed the Captain EO video, starring Michael Jackson for Disney. He created and co-directed the spectacular Siegfried & Roy Show at the Mirage in Las Vegas, followed by Steven Spielberg’s film Hook.

He is an associate designer of the Royal Shakespeare Company.

Notable productions for the RSC include: Macbeth, The Comedy of Errors, King Lear, Once in a Lifetime, The Greeks, Nicholas Nickleby, Hedda Gabler, Peter Pan and Mother Courage and Her Children.

His work at the Royal Court includes: Disconnected, Lear, Big Wolf and Cancer. Productions for the Royal National Theatre include: The Party (Olivier’s last performance at The Old Vic); Equus, later seen worldwide; Trelawny of the ‘Wells’, An Enemy of the People, Peter Pan, Candide and South Pacific.

Opera credits include: Lohengrin and Macbeth for the Royal Opera Covent Garden; Don Giovanni (WNO); Idomeneo for Glyndebourne; The Devils for ENO and Nabucco for the Metropolitan Opera.

Other designs include: Birdsong (West End); Burning Blue at the Haymarket (1996 Olivier Award for Best Set Design); The Tower and Who’s Afraid of Virginia Woolf? (both at the Almeida); Martin Guerre (West Yorkshire Playhouse and tour); the musical version of Jane Eyre on Broadway; Skellig at the Young Vic; Aladdin at The Old Vic, and the 2007 production of Equus.

Design awards include: four Olivier Awards, a BAFTA, and five Tony Awards for Nicholas Nickleby, Cats, Starlight Express, Les Misérables and Sunset Boulevard. Mr Napier is a member of the American Academy of Achievement, was elected Royal Designer for Industry in 1996 and is an honorary fellow of the London Institute.

Trevor Nunn subsequently asked him to do his first commercial musical, Cats.

“A bit of a titter went around the theatre community that we were doing a show about pussycats, but I was determined to make it as rough as possible and not like a Puss in Boots pantomime. I’m more of a concept and barbed-wire designer; I don’t do flowers and I don’t do really good curtains either – that has always been my downfall!”

Cats, instead, became gritty and imaginative: a giant blown-up junkyard playground for felines to play in.

See Here for all costume designs for Cats.

Concept for the Jellicle Ball 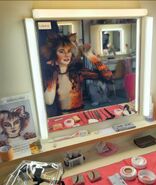 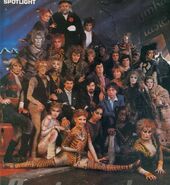