Female
Jennyanydots is played by Rebel Wilson in the Cats film, with ensemble work by Leanne Jones.

Jennyanydots is a lazy cat that sits at home all day. In her boredom, she teaches mice music, crocheting, and tatting. She also thinks the cockroaches just need employment. However, she also eats the cockroaches. She is very friendly with Munkustrap and is seen watching Rum Tum Tugger's number with him. She is annoyed when the Rum Tum Tugger makes fun of her number and calls it boring. She tells him to get out of her house, but then she is later seen nuzzling him. She is annoyed by Bustopher Jones and is unhappy when she is captured with him.

Jennyanydots is also clumsy at times; there were scenes in which she accidentally hurt herself, such as when she sat and accidentally placed her hand on a mousetrap and swung a chain around when escaping Macavity and Growltiger with Bustopher Jones, Skimbleshanks, and Gus.

Her ginger appearance is similar to Jellylorum and Bombalurina. During her number, she unzips her skin coat and reveals a sparkly purple outfit underneath. 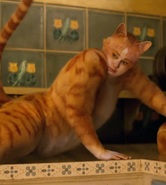 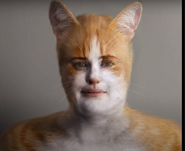 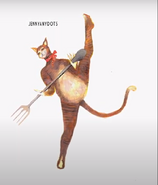