Jemima is a supporting character in Cats. The youngest kitten, her innocence and compassion plays an important role in Grizabella's search for acceptance.

Jemima originated in the London production, but the same role was renamed Sillabub on Broadway so as to avoid any negative racial connotations. "Sillabub" has since become the preferred name for the character outside of Europe. In these productions, the name "Jemima" may instead be given to a female ensemble dancer, if used at all.

Jemima is an innocent, sweet-natured, affectionate kitten, typically the youngest Jellicle. She gets along with the entire tribe thanks to her friendly and welcoming disposition; the older cats are protective of her while the younger cats enjoy playing with her. Despite her age, Jemima demonstrates a deep sense of empathy and intuitive understanding, particularly with regards to Grizabella. Because of this, she is telepathically selected by Old Deuteronomy to relay his message of Happiness halfway through the show, possibly hinting at her mystical nature.

Compared to her alternate, Sillabub, she is often portrayed as more subdued.

Jemima is one of the kittens who, in her innocence and with empathy, repeatedly reaches out to Grizabella - her attempts at contact always being stopped by the older cats. In earlier productions, she also sang a line in the reprise of "Grizabella the Glamour Cat", remarking on Grizabella with curiosity and wonder.

During "The Moments of Happiness", Old Deuteronomy telepathically channels his sage wisdom through Coricopat and Tantomile, to Jemima who sings a reprise of "Memory". Later, when it is time for Old Deuteronomy to make the Jellicle Choice, she sings another "Memory" reprise known as "Daylight". Unlike Grizabella's melancholic rendition, Jemima's version of "Memory" is hopeful and yearning. When Grizabella makes her final entrance, Jemima and Old Deuteronomy are the only cats who do not turn away from her. Jemima also joins Grizabella for a small verse in "Memory", encouraging the collapsed Grizabella to get up and keep singing. Vocally, she is known for her high, clear soprano.

Jemima participates in all the ensemble dance numbers, usually interacting the most with the other kittens such as Victoria. She is a fan of the Rum Tum Tugger and joins the other female kittens in swooning over him. In some productions, she is included in a magic trick during "Magical Mister Mistoffelees".

The Japanese production includes both Jemima and Sillabub, with the role that is typically either Jemima or Sillabub given to Sillabub. This Jemima is not a kitten and is instead featured as one of the Gumbie Trio (with Jellylorum and Tantomile) and sings "Grizabella the Glamour Cat" with Jellylorum. The Japanese Jemima is clearly a Calico with black and orange patches on a white base, as a stylistic development from the original John Napier design.

Some productions, notably Australian based, include both Sillabub and Jemima. In these instances, it is Sillabub who is the soloist who sings in "Memory", and Jemima is a less prominent ensemble dancer or swing character.

While her chorus appearance used to vary by production, it has been more or less consistent since the late 2000s/early 2010s, with her design seeming to be a cross between the original Jemima and "almost Jemima" kitten designs. 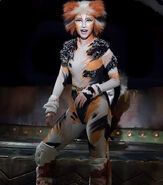 The name "Jemima" is not mentioned in Old Possum's Book of Practical Cats (1939). It is a common English name and spelling variants include Jemina (Finnish).

The following names have also been used for the character of Jemima in various international productions:

Jemima has a reddish maroon/brown coat with a white chest and a spiked collar. Her markings do not strongly relate to any real cat markings, beyond having a white bib and dark body, but she could be viewed as a dark tabby or Tortie. Her wig is often styled into spunky red-black-and-white spikes. In recent productions, since the Palladium revamp, her wig is of a dull brown-and-black color and more wild. She is one of the few cats who wears gloves instead of arm warmers.

Since the release of the 1998 film, the London/video costume designs have become more common in worldwide productions, however the characters have not been re-named to align with the designs. This has led to the reddish brown Jemima design being used for Sillabub in more recent productions.

Andrew Lloyd Webber has said that they originally wanted one actress who was both the beautiful solo dancer that is Victoria, and the sweet-voiced soprano that is Jemima. However when they couldn't cast a strong enough dancer with a strong enough voice, the concept of the female kitten was split into the two roles.

Jemima is often used to represent the playfulness and curiosity of the show. Victoria and Jemima are often paired together, both on-stage and at showcases, to represent the two sides of the show; Victoria standing for grace, beauty, and elegance, and Jemima standing for innocence, emotion and playfulness. She is featured in many advertisements for both the video and the show. Jemima sang at the 2014 CATS Press Launch at the London Palladium, singing her solo as the first act before the other Jellicles came in. Andrew Lloyd Webber's future ex-wife, Sarah Brightman, portrayed Jemima originally, and would go on to perform other soprano roles such as Christine in Phantom of the Opera. 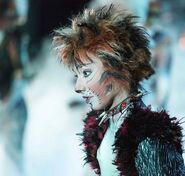