Jellylorum is a principal vocalist in Cats. She is usually portrayed as a more mature queen, patient and nurturing when dealing with the elderly Gus and the young kittens.

She usually doubles as Griddlebone, who is a larger-than-life pastiche of an operatic soprano. The role thus requires a versatile actor with a strong soprano voice.

Jellylorum is down-to-earth and nurturing, typically portrayed as one of the more mature Jellicles alongside Jennyanydots and Skimbleshanks. Much like T S Eliot's description (see Etymology section), she likes to keep busy and make herself useful. She is often seen trying to bring order to the tribe, watching over the kittens or scolding them when they misbehave. She has a lot of warm affection for the elderly Gus and acts as his caretaker. In some productions, Jellylorum is portrayed as much younger and more playful, while still taking care of Gus as if he were an elderly relative.

She initially disapproves of Grizabella and prevents the kittens from touching her. During the "Grizabella" reprise, Jellylorum snidely remarks on Grizabella's sorry state, warning the kittens not to end up like her. However, she is eventually moved by Grizabella's rendition of "Memory" and comes to touch and accept her alongside the rest of the tribe.

Jellylorum is one of the more prominent vocal roles. She sings as part of the Gumbie Trio in "The Old Gumbie Cat" and has solo lines in "Bustopher Jones". In earlier productions, Jellylorum also sang a line in the reprise of "Grizabella the Glamour Cat". While she does not have a song of her own, she is the primary singer of "Gus: The Theatre Cat", a song about the life and acting career of the titular Gus.

She is not featured as a dancer, and her role often puts her at the back or sitting out the most intensive dance sequences. She does however take part in most of the ensemble dances, including the tap dance in "The Old Gumbie Cat".

In stark contrast to her down-to-earth character, Jellylorum usually plays the flamboyant Griddlebone in "Growltiger's Last Stand" (though the role is occasionally given to Jennyanydots). She is therefore required to be a strong operatic soprano to be able to sing the Italian Aria (if included in the production). Even when the Aria/Griddlebone is omitted from a production, Jellylorum is still cast as a strong soprano anyway and she often leads the soprano section of the chorus.[1] Moreover, the high C in "Jellicle Songs for Jellicle Cats" is usually given to either Jellylorum or Jennyanydots.

I am glad you have a Cat, but I do not believe it is So remarkable a cat as My cat. My Cat is a Lilliecat Hubvously. What a lilliecat it is. There never was such a Lilliecat.

and its one Idea is to be

It is so lillie and
small that

It can sit on my ear!

According to Eliot's secretary, Jellylorum is the basis for the concept of "Jellicle Cats", both in name and description.[3] Eliot later included his cat's name in "The Naming of Cats" as one of the "peculiar, and more dignified" names. Spelling variants of her name include Jellilorum (German).

The following names have also been used for the character of Jellylorum in various international productions:

Jellylorum is a golden tabby and white cat. Unlike the fluffy little kittens, she tends to be more elegant and smooth in her outline with neither arm warmers or gloves. Often, she wears a braided fabric collar.

Japanese Jellylorum design amongst other cats 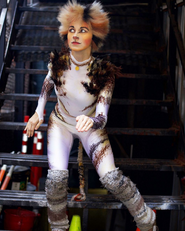 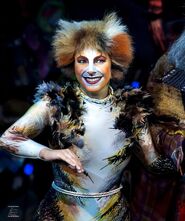 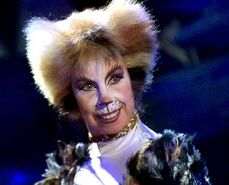