"The Naming of Cats"

Trevor Nunn and Richard Stilgoe after T S Eliot
"Jellicle Songs for Jellicle Cats" is the prologue in which the company introduces the audience to the concept of Jellicle Cats. It is the first full production number in Cats.

The number starts with Demeter caught in car headlights, which startles her and she runs for cover. Gradually, one by one, the entire tribe pop up and add their voice about what it means to be a Jellicle cat. The number builds into a full song and dance routine showcasing Gillian Lynne's choreography. The number moves through several sections at varying paces, including the iconic "Pyramid" pose as the ensemble gathers as a choir, only to have a massive boot thrown at them, presumably by a human rudely awoken by their singing, scattering the cats back into action.

As this is the first number in the show, various featured cats are present in their "chorus" costumes. Rum Tum Tugger is probably the most recognizable, as he still wears his black and gold unitard. However, he has legwarmers covering his spotted ankles and lacks his mane, wearing instead a shorter, simpler wig. Old Deuteronomy wears a grey tabby costume, often resembling a less detailed Munkustrap. Grizabella's chorus costume ("Babygriz") consists of grey with brown markings. She can be hard to spot in the ensemble, but often is the cat to carry the boot offstage. Asparagus, the chorus identity of the actor who plays both Gus and Bustopher Jones, usually gets a moment in the spotlight at the end of the song as he stops the action when he spots a man who's not heard of a Jellicle Cat.

The lyrics for this song were written by Trevor Nunn and Richard Stilgoe with the intention of "celebrating the supremacy of Jellicle cats".[1] It is modelled after an unpublished T S Eliot poem titled "Pollicle Dogs and Jellicles Cats", that had been given to the Cats creative team by Eliot's widow, Valerie, in 1980. The ending lines about the "man who's not heard of a Jellicle cat" are taken from this poem,[1] with said man framed as being Eliot himself in the original poem.

Besides the opening line which is always sung by Munkustrap, the distribution of lines varies by production. The original London version included an additional chorus that was cut when the show transferred to Broadway (italicised in the Lyrics section).

"Jellicle Songs" is primarily set in the common time. It has a complicated structure with many subsections, but can generally be divided into four main parts: the opening section, the verses, the choruses and the hymn section. The opening consists of the orchestra playing "vague, loose phrases" that fade quickly and are spread out among long silences. This goes on for eight phrases as the cats begin to pop up from various hidden stage entrances.[2]

The music then moves to the first verse as Munkustrap sings his opening line. After him, the other cats join in alone, in pairs, or in threes. The verses are composed in the key of E minor and have a tempo of 132 beats per minute.[3] They are grouped into eight lines that are loosely based on the shape of the opening eight orchestral phrases.[2]

The ensemble sings the chorus together, with the lyrics varying slightly each time but always with an "engaging rhythmic syncopation". Each subsequent verse builds in momentum, and the choruses similarly gain harmony. The volume of the entire number builds as more voices and instruments join in. Neither the verses nor the choruses repeat in exactly the same manner; each varies in melody, rhythm, voicing, instrumentation, and lyrics.[2]

The momentum drives to a halt partway through the number as a completely new hymn section is introduced. The cast momentarily stops their dancing and gathers like a choir, singing in a four-part harmony while accompanied by an organ.[2] This section is composed in the Bb major key with a slower tempo ("meno mosso") of 82 beats per minute.[3] After the hymn, the music transitions back to the chorus, and after several more verses and choruses, the number suddenly stops with no formal closure as "the man over there" is spotted, transitioning to "The Naming of Cats".[2]

Musical segments from "Jellicle Songs" are revisited later in the show. The instrumental opening and the verse material are revisited in the "Macavity Fight", while the hymn section is quoted in "The Journey to the Heaviside Layer".[2]

Are you blind when you're born?
Can you see in the dark?
Dare you look at a king?
Would you sit on his throne?

Can you say of your bite
That it's worse than your bark?
Are you cock of the walk
When you're walking alone?

When you fall on your head, do you land on your feet?
Are you tense when you sense there's a storm in the air?
Can you find your way blind when you're lost in the street?
Do you know how to go to the Heaviside Layer?

Can you ride on a broomstick to places far distant?
Familiar with candle, with book and with bell?
Were you Whittington's friend? The Pied Piper's assistant?
Have you been an alumnus of heaven or hell?

Are you mean like a minx? Are you lean like a lynx?
Are you keen to be seen when you're smelling a rat?
Were you there when the pharaohs commissioned the Sphinx?
If you were and you are, you're a Jellicle cat

We can dive through the air like a flying trapeze
We can turn double somersaults, bounce on a tire
We can run up a wall, we can swing through the trees
We can balance on bars, we can walk on a wire

Can you sing at the same time in more than one key
Duets by Rossini and waltzes by Strauss?
And can you, as cats do, begin with a 'C'
That always triumphantly brings down the house?

Jellicle cats are queens of the night
Singing at astronomical heights
Handling pieces from the Messiah
Hallelujah, angelical choir!

The mystical divinity of unashamed felinity
Round the cathedral rang "Vivat!"
Life to the everlasting cat!
Feline, fearless, faithful and true
To others who do what

There's a man over there with a look of surprise,
As much as to say, "Well now how about that!"
Do I actually see, with my own very eyes
A man who's not heard of a Jellicle cat? 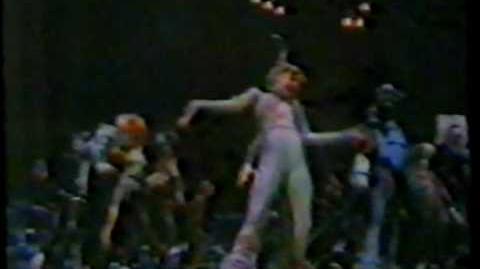 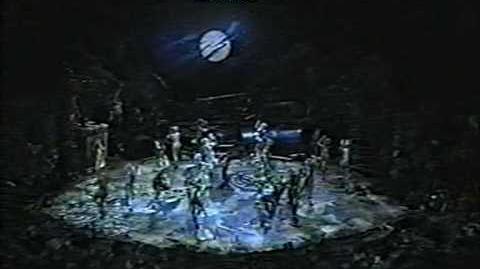 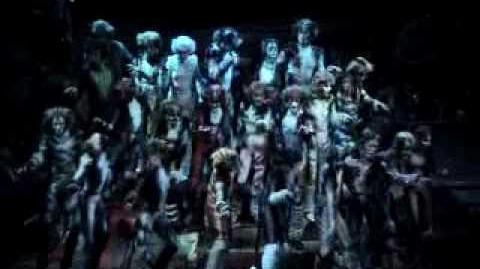 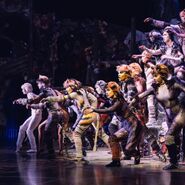