"The Song of the Jellicles"

Andrew Lloyd Webber
The "Jellicle Ball" has earned Cats the reputation of being one of the hardest shows to perform in musical theatre history. The number is a full 9 minutes and 30 seconds (originally 10 minutes) of unbroken dance, demanding the highest calibre of dancing from performers who are also singers, actors, and playing cats.

The "Jellicle Ball" is often conflated with "The Song of the Jellicles", but it is the dance-only section of the overall Ball sequence.

The Jellicle Ball is an annual celebration which has gathered all the members of the Jellicle Tribe together on this night. As the cats dance in celebration, Grizabella creeps into the shadows to watch. Victoria, the white cat, is symbolically mated with one of the male characters of similar age, after which everyone snuggles down to nap. However the magical cats - Mistoffelees, Coricopat and Tantomile, sense Grizabella's presence, and in retaliation the cats begin to dance again, even more spectacularly than before.

Throughout the number, many of the cast will usually leave the stage to dance along the aisles and interact with the audience.

In the middle of the "Jellicle Ball", Victoria performs a pas de deux with one of the male cats, exactly who varies between productions. The intimate choreography made up of balletic lifts is sometimes dubbed the "mating dance".

In the 1980s and 1990s, Victoria's dance partner was mainly either Admetus (UK) or Tumblebrutus (outside of the UK). More recent productions usually give this featured moment to either Admetus or Plato. The part has also gone to Pouncival, Carbucketty, Mistoffelees or Alonzo in major replica productions throughout the years.

The music for the "Jellicle Ball" combines many of the melodies heard previously in the show, including the "Overture", "Jellicle Songs for Jellicle Cats", and "The Invitation to the Jellicle Ball". The only character's melody we hear however, is Old Deuteronomy's.

In 2003, Andrew Lloyd Webber cut out some bars of the music when he rearranged the show for the UK Tour, reducing the length of the Ball by around 30 seconds. This change has been incorporated into all replica productions since.

The "Jellicle Ball" is made up of many sections, each of which were named by Gillian Lynne. Some sections have alternate names, used by different productions and replicators. Additionally, some sections, mostly in the beginning half of the ball, differ between productions and years. The Broadway revival in particular, fused the original Gillian Lynne choreography with new choreography by Andy Blankenbuehler. This video gives a general overview of all the sections:

This section is still a work in progress 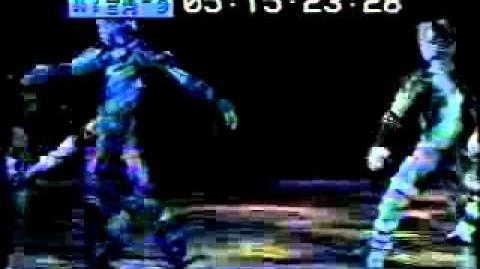 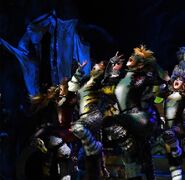 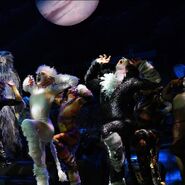 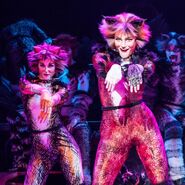 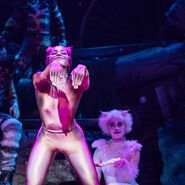 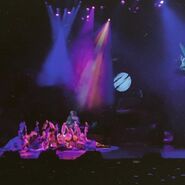