For the musical number of the same name, see Gus: The Theatre Cat.

Gus, the Theatre Cat, is a featured character from the musical Cats. He is an old and feeble cat who misses his heyday when he was a theatre star. His full name is Asparagus, which doubles as the name of his ensemble identity.

Gus is an elderly, feeble cat who loves reminiscing about his storied history as a stage actor. Because of his age though, he is rather vague and a little confused initially. As he gets into the flow of telling his story, he becomes more confident and outspoken, lamenting about the state of modern theatre and "these kittens... who do not get trained as we did, in the days when Victoria reigned!" He brags about his past roles, particularly proud of playing Firefrorefiddle and Growltiger.

Gus is the first cat we are introduced to in Act II of Cats, where he and Jellylorum relate highlights of his career, contrasting his present state with his acting heyday. They boast that "He has acted with (Henry) Irving, he's acted with (Herbert Beerbohm) Tree." He and Jellylorum stress in particular his creation of the role of Firefrorefiddle, the "Fiend of the Fell". Gus goes on to relate how he "Once played Growltiger, could do it again..." which leads into the "Growltiger's Last Stand" scene. In the 2016 Broadway revival and subsequent US and UK productions, however, he plays the Rumpus Cat in "The Awefull Battle of the Pekes and the Pollicles" instead.

The role of Gus is usually played by the same actor who portrays Bustopher Jones and Growltiger (if included). The actor also appears in the ensemble in a separate costume; it depends on the production whether this ensemble character, Asparagus, is meant to be a separate character or merely Gus' ensemble look (similar to how Jennyanydots' song and ensemble costumes are very distinct). Sir John Mills played Gus in the 1998 film, but due to his advanced age and blindness, he was unable to play more than just a cameo role. This meant that Gus' ensemble part, Asparagus, was played by a different actor for that particular production.

His name is actually Asparagus, after a type of vegetable. But as the other cats find it a "fuss to pronounce", they "usually call him just Gus".

The following names have also been used for the character of Gus in various international productions:

Gus is a striped grey/brown tabby. His wig is predominantly grey and straggly and has small rolled ears. He wears a patched blanket as a coat that covers him entirely onstage, in order to disguise the Growltiger costume beneath. 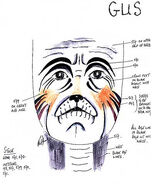 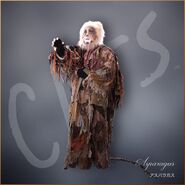