Dancer, Acrobat, Martial Artist
Grumbuskin is a rarely used character, the name taken from the T S Eliot poem "Growltiger's Last Stand". The character originated as the name of one of the Raffish Crew members, and was introduced into the ensemble in the 2012 Chinese production as a "Chinese martial arts cat".[1]

In the original London Production, the few lines of "Growltiger's Last Stand" that refer to Growltiger's "Bucko mate Grumbuskin" and "Bosun Tumblebrutus" were retained from the original poem, and the roles were played by Munkustrap and Alonzo respectively. Apart from these solo lines, the names had no bearing on their part in the number, and the four lines of the song were later cut.

In the Chinese production, Grumbuskin was included as an ensemble character, not a named swing, and doubles as Genghis, the lead Siamese, for the "Growltiger's Last Stand" sequence. The use of a name formerly belonging to one of Growltiger's crew to double as the leader of the Siamese mimics many older productions that had Tumblebrutus double the same role.

Ensemble Grumbuskin is essentially the Chinese equivalent of Japan's Gilbert. Both ensemble characters are noted for their acrobatic prowess and their role in "Growltiger", where they display their martial arts sword fighting skills. 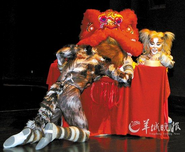 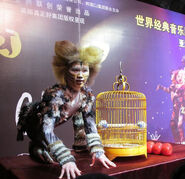 Costume back, China 2012 (on the ground behind Munkustrap with one paw forward)

Clinging to the downed Munkustrap, looking up at Macavity