Growltiger
The Terror of the Thames

Growltiger is a featured character in the musical Cats. He appears in "Growltiger's Last Stand". His musical number is a pastiche of Music Hall dramas, as Gus is reminiscing about one of his favourite roles performing an old-fashioned melodrama.

The 1998 film cut the scene that features Growltiger, and since the Broadway revival, the character has also been cut from all US and UK replica productions. However, the 2019 movie features Growltiger as a lackey working for Macavity.

Growltiger was a "Bravo Cat who lived upon a barge", one who scoured the River Thames from Gravesend to Oxford, terrorizing the inhabitants along the river, including "cottagers", canaries, geese, hens, "pampered Pekinese", and the "bristly Bandicoot that lurks on foreign ships". Growltiger is usually envisioned as a pirate, although he is never explicitly described as such.

Growltiger is a caricature personality, highly passionate, swift to anger at the incompetence of his crew, desperately smitten by the beautiful Griddlebone, and terrified of the Siamese. He is a highly dramatic Operatic Tenor, battling with the Soprano (Griddlebone) for the spotlight.

Growltiger is a major singing role, requiring a strong operatic tenor voice. He is only featured in the song "Growltiger's Last Stand", which describes how he meets his fate when he least expects it, while distracted by the beautiful Lady Griddlebone, his barge is over-run by Siamese pirates who force him to walk the plank.

Tony Timberlake had been cast to play Growltiger in the 1998 movie, however due to filming overruns the scene was cut from the final production.

Growltiger is said to be a "Bravo Cat" in his song. The term was made up by T S Eliot for a type of cat. In a letter to a friend, Eliot wrote:

The following names have also been used for the character of Growltiger in various international productions:

He is portrayed as a shabby tabby with pirate-like attire. He is short an eye and had a "somewhat missing" ear. His costume is a patchwork of red, black and white stripes, with a trick eye patch (mesh in the middle to allow the actor some vision) which creates both his missing eye and ear, by the strap of the patch crushing one ear of his wig.

The London Palladium revival re-imagined Growltiger and his crew, rather than bright stage "pirate" costumes, they are instead dark, gritty Dickensian dock workers. 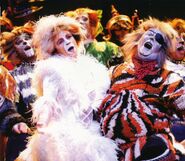 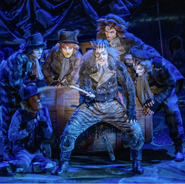