Grizabella the Glamour Cat is a principal character in the musical Cats. Once a glamorous star among the Jellicles, she now lives in the gutter, exiled and disgraced. A central plot of the musical revolves around her plight and ultimate forgiveness by the tribe.

Grizabella is one of the most iconic characters in musical theatre canon, largely due to her singing the hit song "Memory".

Grizabella is characterized by her regret, rejection, and loneliness. She is portrayed as an older cat, although her decrepit state may make her look older than she really is. She usually moves slowly and carefully, suggesting stiffness or an injury. Grizabella is despised by the Jellicle cats for reasons unspecified. She is sad and wistful, dreaming of the days when she was young, beautiful and adored, as her songs describe.

The character is implied to have been a prostitute; the area of Tottenham Court Road, where Grizabella is stated to be seen regularly, was strongly associated with prostitution during Eliot's time. The imagery of the once beautiful star now residing with those shunned by society became a central theme for the character and the musical as a whole.[1] During her entrance, Grizabella refers to herself as such:

These lines are lifted from T S Eliot's "Rhapsody on a Windy Night"[2] (which also provided inspiration for the lyrics of "Memory"), in which the woman being described is a prostitute waiting at the door of a brothel.

According to Harry Groener (original Broadway Munkustrap), Grizabella's implied "tawdry" past is not the reason for her exclusion from the tribe:

Grizabella first appears as the cats are having fun with Rum Tum Tugger's antics. Her presence immediately kills the mood. Most of the older Jellicles start scratching, clawing, and hissing at Grizabella. The kittens are curious, some try to touch and welcome her but are quickly pulled away by the elders. Bombalurina and Demeter sing "Grizabella the Glamour Cat" to explain her story.

Grizabella longs to be accepted back into the tribe - hiding in the shadows and watching the Jellicle Ball. At the end of the Ball, she takes the empty stage and copies some of the dance moves but has difficulty due to her disheveled state. Grizabella then sings the first verse of "Memory", and reaches out her hand toward Old Deuteronomy, but walks offstage, unaccepted. This inspires Old Deuteronomy to sing "The Moments of Happiness" at the start of the next act, encouraging the cats to ponder and reflect on the meaning of happiness.

Grizabella appears once again just as Old Deuteronomy is about to decide who will go to the Heaviside Layer. She is now more desperate than ever to earn the acceptance of the Jellicle tribe. As she is singing a reprise of "Memory", she collapses. Some of the Jellicles reach out towards her in concern, but they are still hesitant to touch her. Then Jemima (also known as Sillabub) picks up her verse and helps Grizabella finish her song. Once Grizabella is finished singing, she reaches out her hand one last time. Victoria then reaches out and touches her, accepting her back into the tribe. The remaining Jellicle cats also finally touch her and accept her back into the tribe. Grizabella is at last forgiven and accepted by everyone. She is then chosen by Old Deuteronomy to be reborn, ascending up to the Heaviside Layer to "come back to a different Jellicle life".

The character originated from an unpublished poem by Eliot titled "Grizabella, the Glamour Cat". The poem was not included in Old Possum's Book of Practical Cats (1939) because it was considered "too sad" for children.[4] The name "Grizabella" is derived from "grizzle" which means either "grey" or "dishevelled", and "bella" which means "beautiful". Hence, "Grizabella"; "the grey beauty" or "the dishevelled beauty".

The following names have also been used for the character of Grizabella in various international productions:

As with most of the featured characters, Grizabella has her own instrumental motif that accompanies her every time she enters the scene. Her motif is a dirge-like cello ground bass, representing the dark mood which constantly surrounds her. Grizabella's ground bass line is composed in the key of A minor, though it moves up a semitone to Bb minor in her final entrance to accommodate "Memory".[5]

Grizabella wears a ragged and worn out fur coat, covering the remains of a black sequinned dress. She wears high-heeled shoes and stockings over her unitard, but one stocking has fallen around her ankle. Her wig is long and curly, the only wig in the show to be made of human hair rather than yak hair.

The 2014 London Palladium revival cast Nicole Scherzinger in the role, famous for her glamorous style, and Grizabella's costume was redesigned in keeping with Nicole's "Pussycat Doll" look. She was given long, straight hair, a corset and thigh-high boots, in a tan and black colour scheme. Her coat was more fitted, with short ragged sleeves and a more defined waist. It is also cut away at the front, revealing more of the tight-fitting outfit underneath. Her makeup was also made much less prominently "cat" and more glamorous, with no "age" lines, but a scar on her forehead. The inference is that she has had a head injury causing her downfall, but she is not particularly old. This new backstory and look for Grizabella has since been used in all European and US-based replica productions, including the 2016 Broadway revival. 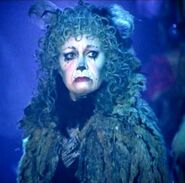 At the beginning of the show, the actress playing Grizabella is usually in the ensemble for "Jellicle Songs" and "The Naming of Cats", dressed as a chorus cat who is referred to as "Baby/Young/Basic Grizabella". Baby Griz is designed specifically to not stand out from the other cats. She has an unremarkable costume of greys and browns, sometimes with a black velvet ribbon around her neck. The unitard and simple makeup form the base of her featured costume, with heavy black lines added to the makeup, and dress and coat over the unitard.

Whether this ensemble character is meant to be a young version of Grizabella or an entirely separate character is up to interpretation. In an interview, Prisca Demarez describes her feelings about her chorus identity:

Marie Berson: I, for one, would be very curious to hear more about the cat you play at first with the Jellicles before Grizabella's entrance! Does she have a name? A role?

Prisca: It's such a delight to perform the opening number with the whole cast! That moment is very important to me. Of course she has a name! Her name is Baby Griz, but I call her Grizzy Baby. She has the same colours as Grizabella on her face. She's as pure as Victoria and doesn't know life's sorrows yet. She's a kitten. I think she rounds everything off. She embodies the beginning of life, in a family, before the choices and difficulties arise.


I'm often asked why Grizabella doesn't come back young and beautiful at the end. I think we actually see her at the start, as Grizzy Baby, like a new life, a blank page to be filled in. It's what Grizabella was when she was little. It's in that form that she'll come back from the Heavyside Layer - as a kitten.

She allows me to have a past with the group, a feeling of having danced with them before I couldn't do it anymore. And she's so joyful and light before she carries the weight of Grizabella's sorrow.

In the 1985 Oslo production, and those derived from it, Grizabella and Young Grizabella were played by different actresses, with Young Grizabella reappearing during "Memory" to sing with her older self (instead of Jemima/Sillabub).