Dancer, Acrobat, Martial Artist
Gilbert is an ensemble character in the Japanese production of Cats. He is an acrobatic tom kitten who doubles as the lead Siamese cat in "Growltiger's Last Stand". His main featured moment is his martial arts sword fight against Growltiger.

Gilbert featured as the lead Siamese cat in the original poem of "Growltiger's Last Stand". Early in the show's development the lyrics were changed to name him "Genghis". However the Japanese production stuck with the original version, and the ensemble character is named after his solo feature.

Gilbert is principally an acrobat role, featuring as the cat on the trapeze. He is often found perched on the high ledges of the set. He also appears to be a rather goofy kitten and is usually one of the smallest males.

Gilbert retains his original role as the lead Siamese in "Growltiger's Last Stand". He is featured in an extended "kung fu" stage fight with Growltiger involving swords and nunchucks, ending with Gilbert slaying Growltiger. This part of the role requires the performer be familiar with martial arts. 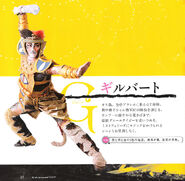 Gilbert as the Lead Siamese

Gilbert's design is related to the Broadway version of Alonzo, he has a white bib over a golden and black design. His makeup design is often striking, as a reduction and stylised version of the typical Alonzo eyepatch. 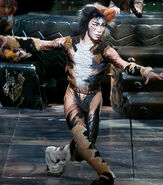 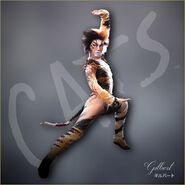