"Ad-Dressing of Cats"
The Finale is the last music heard in the show. Each performer takes a moment in the spotlight to bow, either solo or in pairs. The ensemble sing a final chorus of "Mr. Mistoffelees" as they dance, and make their way offstage. Finally, as the audience leaves, an instrumental reprise of "Memory" is played.

The music falls into distinct sections as reprises of melodies previously used in the show.

An instrumental reprise of Jellicle Songs is played while the cast run through the audience, assembling onstage in time to repeat the last moments of the Jellicle Ball.

Each performer has a moment in the spotlight - performing a moment suiting their character, a leap, a pose, a bow. The music falls silent for applause, depending on the production the Musicians, or just the Musical Director, may make it onstage for a bow. The full cast may take a traditional bow at this point.

The cast sing a final chorus of "Oh well, I never was there ever a cat so clever as Magical Mister Mistoffelees", as they dance around and gradually leave the stage. While in the "Skimbleshanks" section we see the characters, in this last moments onstage, the performers can be out of character and letting their own personalities shine. The Rum Tum Tugger is usually the last character onstage, and the music segues into a brief excerpt of his melody.

As the auditorium lights come up and the audience begins to leave, we hear another reprise of "Jellicle Songs", and finally a reprise of "Memory", and the last moment of the "Jellicle Ball" once more.

In most productions, Cats breaks the normal theatrical conventions of having the minor ensemble characters bow first, leading up to the principal characters taking the final bows. Instead the Cats appear in an apparent random order. Typically pairs of characters bow together, Jellylorum and Gus, Mungojerrie and Rumpleteazer, Coricopat and Tantomile, Demeter and Bombalurina. Acrobats will perform a flip, specifically Bill Bailey/Tumblebrutus will often take the final bow with impressive acrobatics. 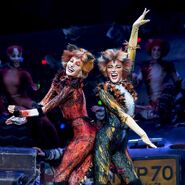 In some productions, Jellylorum will wear Griddlebone's bonnet or bushy tail for the bows, as she is likely to not be recognized as the soprano soloist otherwise. Similarly, Jennyanydots will sometimes wear her orange tap outfit for the bows.

Other productions, mostly European-based, will have leaving cast members stand in the middle of the stage while the rest of the cast surround them.