Dancer
Electra is an ensemble character in the musical Cats. She is generally portrayed as a quiet and reserved kitten.

As one of the minor kitten characters, she is often cut from smaller productions. Electra originated in the 1981 London production, but did not make her US debut until the 2016 Broadway revival.

Electra is generally considered to be a quiet, reserved cat. She is generally less hyperactive than the other kittens, particularly when compared to Etcetera who tends to overshadow her. Despite her more serious nature, Electra still has a playful streak and often joins the other kittens in their antics.

In productions that do not feature Etcetera, Electra tends to be a louder, more energetic character.

Electra is principally a dancing role; she has lines in group songs such as "Jellicle Songs for Jellicle Cats", but does not play a significant role in the show or have any solos. In productions where Electra is included but Etcetera is not, she will take the position of screaming uncontrollably at Rum Tum Tugger. She is most often seen playing with the other kittens, most often Etcetera, Jemima, Pouncival and Tumblebrutus.

In Australian-style productions, Electra commonly appears as a chorus/swing character, able to be cut when the actress is covering another role. In the 2015-16 tour, Electra was promoted to the main cast with her own understudies.

Electra's name is mentioned in "The Naming of Cats" as one of the "fancier" but still "sensible" names. T S Eliot derived the name "Electra" from the mythological character of the same name, who was commonly used in ancient Greek tragedies.[1] Her name is sometimes spelled as "Elektra".

Before she was given a name, the character was originally credited as one of "The Kittens" in the London production.[2]

The following names have also been used for the character of Electra in various international productions:

Electra is a dark ginger and black tortoiseshell and/or tabby (Torbie) cat, usually portrayed in the show as a kitten. Unusually she has considerably more fluff than usual, running down her torso and down one arm instead of an arm-warmer.

A lighter ginger design has occasionally been used as a swing costume for Electra, nicknamed "Lightning Electra".

Electra's development in the early months of the original production, as told through the original designs by John Napier, is complex: The design that we recognise as Jennyanydots' ensemble look was originally labelled Electra. The original plan was for Judi Dench to play both Jennyanydots and Grizabella, both as featured characters and presumably she did not dance in the ensemble as we are used to both Jenny and Babygriz doing. When Judi Dench was injured and dropped out of the show, Elaine Paige replaced her as Grizabella while Myra Sands took over the role of Jennyanydots. Myra was originally slated to play a role named Electra who would sing what later became Demeter's part in "The Old Gumbie Cat" and Jennyanydots' part in "Bustopher Jones".[3] After Myra took over the role of Jennyanydots, the costume she wore as Electra became Jennyanydots' ensemble look instead. Subsequently the un-named "kitten" costume worn by Anita Pashley took the name Electra. 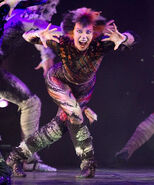